Golden Years was commissioned by the Tête à Tête Opera Festival 2009 as a Lite Bite, intended to be taken on the streets of Hammersmith to lure the public to the festival. It was conceived in an afternoon sipping tea at the Young Vic café and was inspired by Acorn Antiques and a mutual affection for all things granny-related.

Under the careful guidance of musical director Jeremy Patent-Leather, septuagenarian soprano Lavinia Greengarden, is about to take to the stage in the most wildly anticipated show of her career. Aided by lifelong friend, Toots Mulholland and celebrated clarinettist, Nora Queensway, Ms Greengarden is set to present her sprightly selection of arias in front of none other than Claudine d’Armoire, the Arts Council funding co-ordinator for Clapton. Then, disaster strikes! Will Lavinia see her dreams dashed at the last moment? Will Jeremy’s angina flare up? Will Toots get the grass stains out of her new summer frock? Well, there’s only one way to find out! Which is to say, by watching the show. 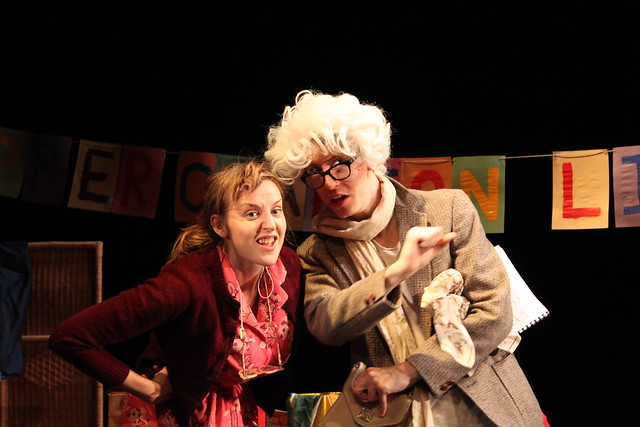 Katherine Broderick studied at the RNCM, the Guildhall School of Music and Drama, the National Opera Studio and the Leipzig Musikhochschule. She regularly performs internationally on the opera, concert and recital platform. Her next role is Donna Anna in Don Giovanni at ENO in the new production by Rufus Norris. She has a dog called Hamish.

Sarah Kershaw studied piano at Birmingham Conservatoire and is now visiting lecturer in music at Birmingham School of Acting and the Oxford School of Drama. She regularly performs her own songs and is currently writing a musical. She is pianist in cult performance orchestra The Irrepressibles. She lives in a castle.

Olivia Duque studied at the RCM. She has played internationally with orchestras including the RTE and Royal Philharmonic Concert Orchestras (including a recent world tour of the show ‘Star Wars in Concert’). She’s currently writing her own material on a vintage Italian accordion that doesn’t really work.

Jordan Hunt studied composition at the RNCM and RAM. He is currently musical director of the Theo Adams Company and violinist in the Irrepressibles. His music has been performed internationally by such artists as Oliver Knussen, James Macmillan, the London Sinfonietta and the BBC Philharmonic and his latest hit ballet was premiered at this year’s Aldeburgh Festival. He favours Jammi e Dodgers to other biscuits.

La JohnJoseph is a British born, American educated artist who explores the creation and dislocation of power in cultural matrices through performance, text and art objects. He has presented performance work at MoMA (San Francisco), the Southbank Centre (London) and Bios (Athens). He is author of five ensembles and three solo plays, a novel (Everything Must Go), a Disco E.P. (Dandylioness) and a compendium of images and writings (boyfriendrobotique.blogspot.com). La JohnJoseph is her own happy ending.