Genesis: Exactly one year ago, Fergal and James visited the Tête à Tête Festival for the first time to see Sharp Fire’s magnificent production of Johnny’s Midnight Goggles. They were so inspired by the sheer invention of this show and the atmosphere of support and experimentation that surrounded the festival; they decided they wanted a piece of the action. With the shelves and airwaves over-brimming with celebrity culture they saw a rich vein of satire and sleaze just waiting to be tapped. Gutter Press – The Opera is the result, and they hope this one-scene taster will wet the audience’s appetite, leaving them begging for more..

We are all in the gutter… but some of us are shooting the stars.

A satire on celebrity culture and the paparazzi photographers who feed off it, Gutter Press – The Opera takes place on the front lines of the oversexed, overexposed and underfed frenzy of starlets and snappers that is: the Fame Game. In this taster one-act production, the audience is offered a front row seat at the circus.

Celebs share an incestuous, mutually sustaining relationship with the ‘gutter-press’. Vulture-like paparazzi feed off scraps, providing a vital link in the fame chain. The ‘red tops’ pay thousands of pounds for a picture of Lindsay Lohan’s crotch, flashed as she steps out of a white limo onto a red carpet. That two centimetre square of expensive underwear puts bread on
the table of the photographers who spend their life on ‘The Hunt’.

As for the starlets… fame awaits. Fame! The lure of it! The smell of it! If you could swap the life of a receptionist for a life in
the spotlight, what would you do? The choice is simple when there is no choice.

And you want to hear the best part? It’s all so easy. All you have to do is flash a bit of flesh… 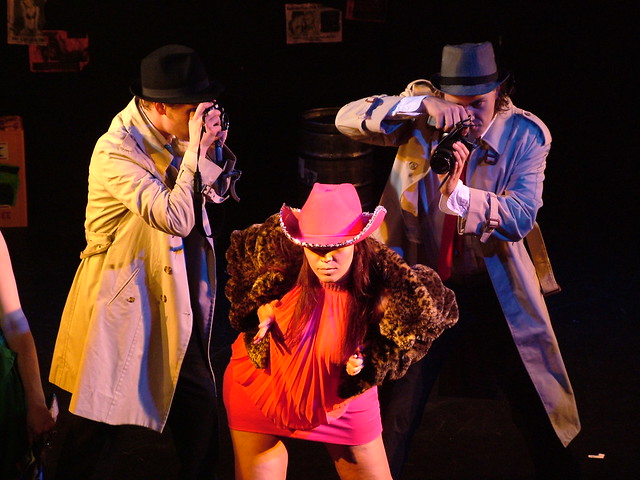 James Richards
James is a librettist, poet, writer and performer working in the London area. He is a founder member of London Poetry Systems, a collective whose mixed-media forays into poetry, music and video have been making waves on the experimental scene. Gutter Press – The Opera is James’ first collaboration with pianist-composer Fergal O’Mahony.

Fergal is a pianist-composer living in London. His playing career has taken him throughout Europe, the US and as far as Kazakhstan. He has appeared as concerto soloist with several orchestras including the Royal Liverpool Philharmonic Orchestra and Manchester Camerata. He has also toured with European Youth Orchestra under Vladimir Ashkenasy. Fergal studied composition with John Casken at the University of Manchester.

After graduating from City University, Abi worked as a Staff Nurse, whilst also studying acting at London’s Central School of Speech and Drama and Kensington & Chelsea College. She has appeared on many radio and television shows, including Hell’s Kitchen and Love Island. Abi’s first stage role was in 2006 in Arthur Miller’s “Two Way Mirror”, for which she won the award of ‘Best West End Debut’. Since then she has starred in the plays “Fat Christ” (Kings Head, London), “The Spare Room Project” and most recently as Gabby in Theatre Productions hugely successful UK Tour of ”The Naked Truth”. Abi will soon be seen in the feature films “Just for the Record” (Danny Dyer), “Do Elephant’s Pray?” (Marc Warren) and “Front man”. Abi has also filmed a role in the new series of the BBC1 hit show “Hotel Babylon”.