For many years Neyire has been developing ideas for creating theatre with music, musician and clarinet as an integral part of the action and storytelling. I felt that there were areas which needed exploring further and set off to discover the questions and responses myself through improvisation and sporadic co-devising periods with director Kath Burlinson. Stolen Voices is the outcome.

Heartfelt and vibrant tale combining theatre, clarinet and voice.
How is it possible to be close to someone and never see who they really are?
Can you ever know anyone completely?
How do you live with the mysteries that a loved one leaves behind?
A Turkish mother’s passionate beliefs force her to live in exile. A daughter explores her identity through music, secrets and song.

A clarinettist of terrific character and imagination – Financial Times 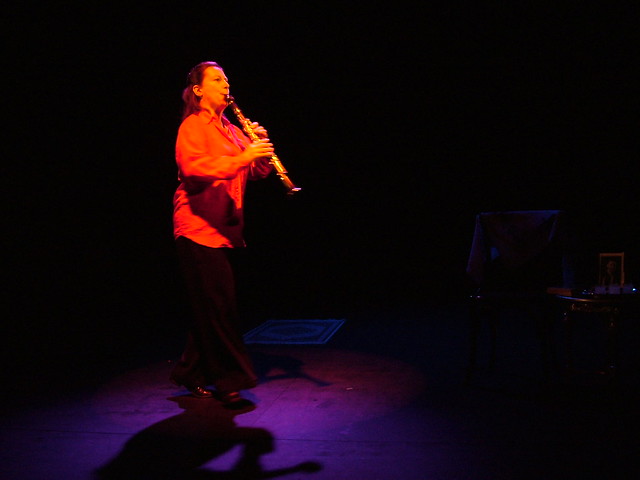 Neyire Ashworth: Neyire Ashworth studied at the Guildhall School of Music and Drama, London (Julian Farrell & Dame Thea King) in The Netherlands (Walter Boeykens) and in New York City (David Weber). Former BBC Young Musician of the Year prize winner, her London solo debut was as part of the prestigious Park Lane Group’s series at the South Bank. Neyire has appeared on BBC radio 3, Classic FM, BBC TV and at concert-halls world-wide. A founder member of the acclaimed Britten-Pears Ensemble, she recorded works by Jolivet and Frank Martin for ASV. Her work with the New Music Players includes recordings of music by Ed Hughes, Jo Kondo and Alexander Krein. Her most recent solo recording is the concerto for clarinet, by film composer Brian Lock. She now plays with the New London Chamber Ensemble, tours of Sweden with Fredrik Hogberg and Italy with Angela Hewitt. She has two CDs on the Meridian label. Her Zimro Trio are planning a documentary project following in the footsteps of their namesake ensemble through Russia and the Far East recreating their journey and the concerts they made during 1917 -1919. Neyire also plays for the Royal National Theatre, Opera Circus and Bamboozle Theatre Company and a number of the UK’s finest orchestras. Appearances as actor/musician include; Little Red Riding Hood (Annabelle Arden) for Almeida Opera Festival and War Horse in London’s West End. Her first instrumental music theatre piece Stenclmusic (music by Rachel Stott) won awards from both the European Association for Jewish Culture and the Jewish Music Institute London.

Kath Burlinson is a director, performer and writer. She co-created the Weird Sisters theatre company, winners of five international theatre awards and a Best Ensemble nomination at Edinburgh Fringe. Her recent solo show, The Mother’s Bones, won the Manchester Evening News Best Fringe Performance award in 2006 and has since been seen at festivals in both the UK and US. Work in development includes Wolf, first presented at Pulse Festival, 2009. Kath has many theatre, TV, film and radio credits as a performer and runs the Authentic Artist workshop programme. She was Associate Director of Youth Music Theatre UK from 2004-2008 and this summer creates a new piece for YMT with composer Conor Mitchell.

The Song of Margery Kempe