Ride is an excerpt from Drive Ride Walk, originally commissioned by the Bridewell Theatre Company. After performing a festival Emi Wokoma version of the show at Tete à Tete’s festival in August 2007, we toured that piece to over twenty public spaces in March this year, including St Pancras Station, and The London Transport Museum! Greenwich Theatre is now supporting us to mount an 80 minute production of the full show (in which all the songs from Ride will be performed) in Autumn 2010. The idea for One Dark Night came about earlier this year, after an attack of the blues!

Ride – A cycle courier, a pedestrian and a tango make a fifteen-minute love story. Amidst the pedestrian rush and clatter of office life, there are unexpected moments of magic. This excerpt from Drive Ride Walk brings warmth to the ordinary and familiar patterns of life & work in the big city.

One Dark Night – a protagonist and her chorus. A woman arrives back at her flat after another dreary day at work. She is depressed. She is alone. With a radio, a television and a fridge offering the only Spartan comfort, how will she find her way through to a more hopeful morning? 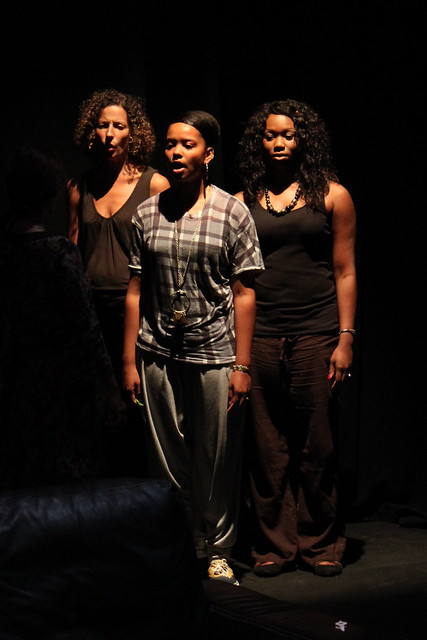 Osnat Schmool (composer) trained at the Bristol Old Vic Theatre School and Goldsmith’s College. Her first show, Re: Love, premiered at the Bridewell Theatre in 2003 (directed by Carol Metcalfe, movement directed by Sabina Netherclift) Osnat’s work draws on culturally diverse influences from Latin American and African music and dance to her own Middle Eastern and Jewish roots. She has worked as a jazz and a cappella singer and studied African and Latin dance and drumming. Her attitude to both textual development and musical composition is driven by combining experience as a performer with work as a teacher of unaccompanied vocal music, Goldsmith’s College and The Roundhouse. Osnat’s passion is for an energetic, physically based performance style and working with companies like the Gate, the Clod Ensemble and Scarlet Theatre allowed her to see how she could fuse this theatrical approach with her musical versatility.

Sabina Netherclift (director) has collaborated with Osnat since the first workshop of Re: Love in 2003. She trained with Jacques Lecoq in Paris. As a performer she has worked with the The Clod Ensemble, Redcape Theatre, the Young Vic Theatre, National Theatre Studio, Company FZ, Gate Theatre and at The Lyric, Hammersmith. As a director/ movement director, Sabina’s previous projects include directing Turtle Opera for the Royal Opera House; Turtle Key Arts, Cold Hands, Warm Hearts for ENO Baylis, and running workshops for amongst others; The Clod Ensemble, The Royal Academy of Music, the Hayward Gallery, Turtle Key Arts and Young Vic Theatre.

Songs For Our Age