MEDOUSA’ s original score is the product of a collaborative process. Applying the creative methodologies of devised performance, the work has developed from Maya Sapone’s vocal improvisations on Jacek Ludwig Scarso’s libretto, integrated with instrumental explorations by Carina Drury and Eva Caballero, increasingly shaped by Andrew Morley. Both score and choreography include improvisational aspects and have been informed by the collaborative input of the company members. This performer-driven approach to opera making was launched in March at the American University of Paris as part of the Arts Arena’s conference on performance. The completed piece will be staged here again in October. MEDOUSA has been produced in conjunction with the Company’s other new stage work, The Passion of Saints Sergius and Bacchus, recently premiered at the Arcola Theatre.

Synopsis: Following the critically acclaimed production The Magdalene Mysteries, Vocal Motions Elastic Theatre revisits the myth of Medousa. Having offered herself to Poseidon, god of the sea, in the hope of gaining divine powers through their

encounter, Medousa senses that she has provoked Athena’s rage. By the end of that same night she will be turned into a

monstrous creature by the jealous goddess. As she awaits Athena’s revenge, full of foreboding for her own body’s terrifying transformation, Medousa foresees Perseus in a dream. 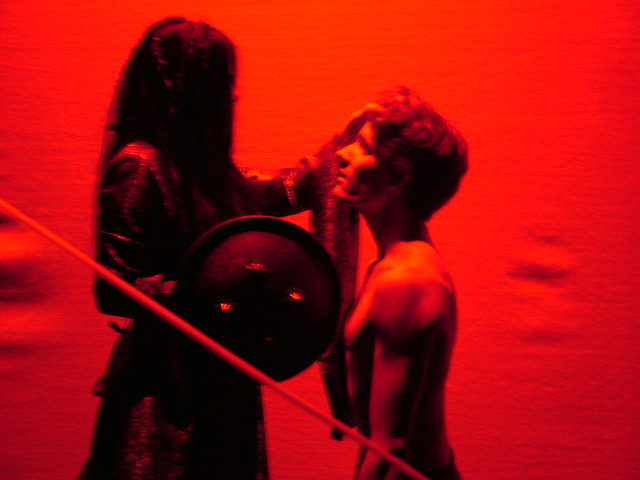 punishment approaches, the prospect of the evil powers she is about to receive entices her increasingly.

Jacek founded Vocal Motions Elastic Theatre in 2001 and has conceived and directed its internationally acclaimed productions ever since. He is Senior Lecturer and Theatre Skills Coordinator at London Metropolitan University and Lecturer in Dance History at London Contemporary Dance School. Since completing the MA Voice at Central School of Speech and Drama, he has built an international reputation as voice coach and theatre practitioner and is the author of Voce Per Ogni Giorno, published in Italy by Armando Editore.

Italian and Thai opera singer and improviser, Maya trained in London (Trinity College of Music), Italy and Spain. She has performed worldwide, in venues including the Royal Festival Hall, the Queen Elizabeth Hall, Tate Modern, the Southwark Playhouse, the British Museum, St. Martin’s in the Field and St James’s Piccadilly. Maya is a permanent member of Vocal Motions Elastic Theatre as well as being associated with the European Chamber Opera and Blüthner Piano in London.

Fernando started his training in contemporary dance at the Real Conservatorio Profesional de Danza, Madrid, where he trained in Limon and Graham techniques. At the same time he joined courses in Contact Improvisation at Estudio 3 and Limon technique with Francesc Bravo. He has recently completed his studies at London Contemporary Dance School.

Carina trained at the Royal Academy of Music, where she completed a Bmus (hons), and a PgDip on baroque cello. Winner of the Nancy Nutall Early Music Prize and awarded two residencies at Cheltenham Music Festival Academy, she works with ‘Sunharbour’, a 14-piece ambient jazz musical collective and is a participant on the Orchestra of the Age of Enlightenment Experience Scheme.