The idea for In her little room came from a desire which has been with me since 2008 to write a dramatic work based on an element from ancient Greek myth. For this project I abandoned my initial idea of a chamber opera believing there to be a more unusual “solution” that would better reflect today’s plurality of creative media and, hopefully articulate a new form which could develop into a viable alternative to contemporary opera.

A young woman returns home: a bare room. As she explores the space, progressing from emotions of almost hypnotic indifference to paranoia and back through silent, ritualistic movement she is accompanied by a voice. Little by little over the course of the whole work we come to learn of the relationship that once existed between these two characters – the silent yet present protagonist and the absent voice. To these two strands of the drama are added a third: it is the haunting sounds of the solo violin, the “third presence” that articulates the space between the man and women and which heightens or underplays the tension which slowly emerges from the words.

Inspired by the character of Metharme (Pygmalion’s daughter) and some of the less well known dramatic works by Samuel Beckett such as Eh Joe in regards the relationship between words, music and action, In her little room is a different “take” on music theatre which, though music is still to the fore does away with singers, instead choosing to have text spoken (and hence hopefully more easily comprehendible) and lending greater emphasis on the minutiae of movement/ action; the intention was to create a work essentially theatrical yet where music, words and action directly influence and support each other, where each one is intrinsic to the dramaturgy.

Neither theatre nor opera, dance nor tableaux vivant, In her little room seeks to articulate a sensitive subject through appealing to all your senses. 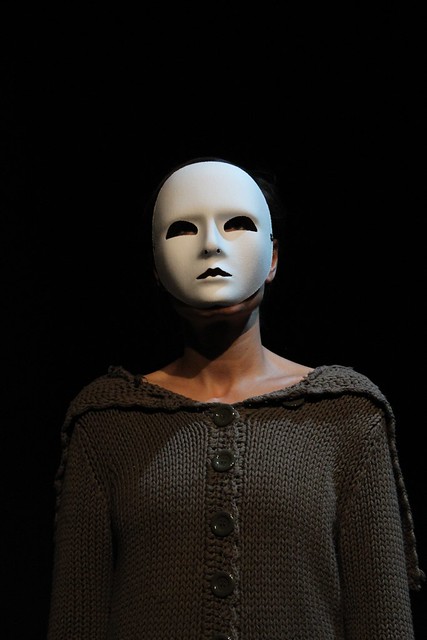 Alexia Anastasiadis is a South African born artist and writer. She has collaborated with musicians including Catherine Kontz and Matthew Robins, has been artist in residence at Tou Scene Art Centre in Stavanger, Norway, and has created artwork for the Eden Project in Cornwall. She is also a co-founder of the music publishing company Shorter House.

Simon has appeared widely in theatre on tour, in the West End and internationally. Recent credits include Alexandar Molokov in Chess (Denmark); the original company of Aladdin with Sir Ian Mckellen at the Old Vic; Eli Whitney in Anything Goes (Grange Park Opera). His latest job was in Frankfurt, playing Yahuda in Terry Johnson’s Hysteria.

Currently working towards a PhD in composition at King’s College London, Paul has a BMus and MMus in composition from the RCM and RAM respectively. His music has been performed across the U.K and abroad including BMIC’s “Cutting Edge” Series, Spitalfield’s Festival, the Perpignan Contemporary Music Festival, France and at Megaron Concert Hall, Athens and features on Flotilla (Big Shed Music).

Sibylla trained at East 15 Acting School. Theatre credits in the UK include Jacques and His Master (White Bear), The State of Mind of Ghosts (Chelsea Theatre), See No Evil (Southwark Playhouse), Blood Everywhere (Tabard), Electra, The Cumnor Affair (Riverside Studios) and Judith, A Parting From the Body (Hologram Rose) Short film/feature credits include Talion – Face to Face, and Revenge.

Born in Yerevan, Armenia Angela studied violin at the Komitas State Conservatory and the Royal Academy of Music, London. In

2002 she won 1st prize at a contest organized by the Lebanese Ministry of Culture and since 2006 has built a freelance career both in the U.K and abroad. Angela is a Lead Violin Teacher for London Music Masters.