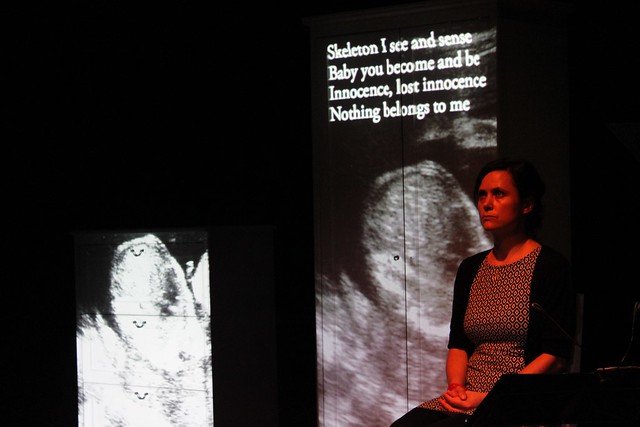 Life Cycle was touching, sometimes searing in its delicate exposure of the pain and loss that can surround child birth. It’s often hard for us to talk about death in a way that also allows for a sense of reconciliation. Both the music and the libretto left the audience feeling they’d had an important shared experience.

Mara Carlyle, is a British singer, songwriter and arranger whose diverse musical background includes church music, jazz, bluegrass, opera and electronica, elements of all of which can be found sitting harmoniously side by side in the music she writes. Her debut album The Lovely was released to critical acclaim in 2004, and the long-awaited follow-up, Floreat, was chosen as Rough Trade’s Album of the Month in July and is due for release in September.

Oliver Coates is an Artist in Residence at Southbank Centre. He plays as a guest principal cello in the London Sinfonietta and principal cello in Aurora Orchestra. He has a strong relationship with many leading young composers, particularly Emily Hall. He curates Harmonic Series, a collection of short events in intimate settings at Southbank Centre, this first year featuring artists such as James Blake, Gameshow Outpatient and Serafina Steer. He attained the highest degree result in the Royal Academy of Music’s history and went on complete his Masters with distinction at New College, Oxford.

Emily Hall is a composer, known for her songs, writing in a style which is classical meets folk meets completely her own style. Her music has been widely performed at festivals including Latitude, Aldeburgh, Faster than Sound, Ether and Spitalfields and by groups like the London Sinfonietta, Streetwise Opera, London Symphony Orchestra and the Brodsky Quartet. Winner of the Royal Philharmonic Composition Award and Genesis Opera Prize. She writes for and collaborates a lot with cellist Oliver Coates and with singer Mara Carlyle and pianist John Reid. Other singers she has written for recently include Robert Murray, Olivia Chaney, Mina Tindle and Alice Grant.

Toby Litt is a Granta Best of Young British Novelist and a regular guest on BBC Radio 3’s The Verb. He is the author of two collections of stories and nine novels, including Corpsing, deadkidsongs, Hospital and I play the drums in a band called okay. His story John and John won the 2009 Manchester Fiction Prize. His website is at www.tobylitt.com.

John Reid’s career to date has shown him to be a pianist of notable versatility and range, with wide experience as an outstanding chamber musician, song accompanist, soloist and exponent of new music. He is a graduate of Cambridge University, an Associate of the Royal Academy of Music and a principal player of the Aurora Orchestra.

David Sheppard is a sound designer who performs and collaborates with a wide variety of artists from Steve Reich to Kaija Saariaho, Bryce and Aaron Dessner of the rock band The National, to architect Daniel Libeskind with composer Simon Bainbridge . He collaborates across art forms, including recent projects with visual artist Matthew Ritchie at the White Cube and his touring installation The Morning Line. His partnership Sound Intermedia is recognised as an important force in the world of contemporary music production, acknowledged through fellowships with NESTA and the posts of principal players with the London Sinfonietta.