Genesis Metamorphosis – monodrama in five scenes, based on an idea by Franz Kafka.

In Metamorphosis, I take the single idea of a man who turns into a human-sized bug as a starting point to create a musical drama. What would it be like for any of us to turn into such a bug? How could this happen? What effect would it have on our lives? How would we survive? In this composition, I seek to imagine how it would be for any one of us to become a bug!

Metamorphosis was premiered at the Royal Exchange Theatre, Manchester, as part of the Special FX series. Subsequent performances have been for the BBC Philharmonic’s Ink Still Wet programme, and at the Royal Northern College of Music as a Spotlight event. Future plans for Metamorphosis involve its expansion into a staged work for greater forces.

Metamorphosis has been nominated for a British Composers Award, Vocal category, and is an Arts Council England commission.

Overnight, an ordinary man turns into a human-sized bug. This is the story of his first day.

Scene 1 In the attic. A flash forward to the end of the day. The bug-man tries to make sense of what has happened to him.

Scene 2 On the roof. The bug-man, having revealed himself to his family, escapes to the roof of his house. There, he has a transcendental experience.

Scene 3 In the town. He comes down from the roof and goes into the town to find his family and patch things up. He is fascinated by what he finds en route.

Scene 4 The attack. The bug-man is attacked by the people in the town, including his wife.

Scene 5 In the attic. After the attack, the bug-man escapes home and hides in the attic. 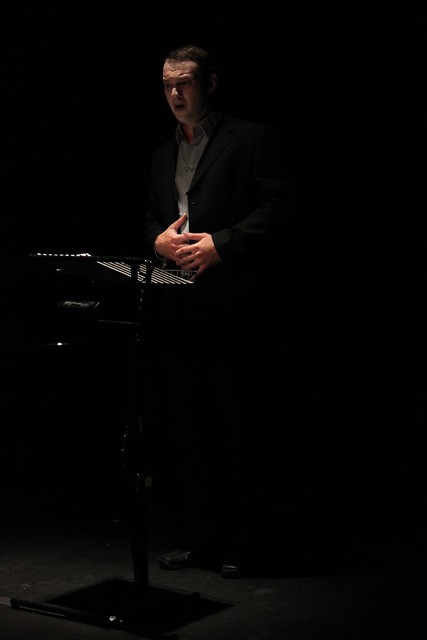 Gavin is a composer, performer and creative producer. He is a member of the Vox scheme at the Royal Opera House, developing new opera scenes with in-house performers and directors, and is a founder member of Out of the Blue productions, an international, new music and dance theatre collective, supported by Arts Council England.

As leader of The Human Voice in Song project Gavin has commissioned and performed several new works for voice, with support from Arts Council England, as well as commissioning new electroacoustic compositions and visual art. From 2009-2011 he curated the inaugural Ink Still Wet series for the BBC Philharmonic, showcasing new work from across the globe. In the autumn Gavin will produce and conduct the UK premiere of the songs of Anthony Burgess, of A Clockwork Orange fame, and will act as editor-in-chief of the scores.

Marcus studied at the Royal Academy of Music with Glenville Hargreaves and Audrey Hyland. In 2009 he was awarded first prize in the Wigmore Hall International Song competition. He is currently playing Eddy in Mark-Anthony Turnage’s Greek for Music Theatre Wales. Future engagements include Novice’s Friend in a new production of Billy Budd for English National Opera, and the title role in Owen Wingrave as part of the International Chamber Music Festival in Nuremberg.