Euridice sings of the great musician Orpheus. She says that she met him once in a dream and in that dream he was able to silence the whole of nature with his playing. When Orpheus met Euridice, they both instantly fell in love. In state of complete bliss they build a house and garden where all there friends can meet. Orpheus and Euridice dance. Orpheus writes Euridice a song about how he feels connected to the whole world through his love for her. After a while Euridice grows ill and dies. Distraught Orpheus storms the gates of the underworld and asks its council to bring her back. After agreeing to let her go, they decree that the terms of her release are reliant on Orpheus leading her back to the living world but without looking at her. Orpheus, driven mad by paranoia turns to her, and Euridice disappears. Euridice sings a second song about being disconnected from the world. Orpheus’s grief changes the music he plays which drives the animals of the world wild. They rip him apart and send his head floating down a river, from which music will forever emerge. 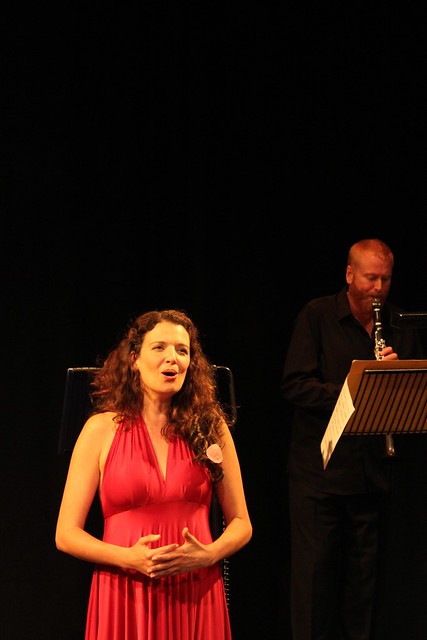 Jay trained at Urdang and, after a successful career as a dancer, he studied clarinet at Trinity College of Music under the tutelage of Victoria Soames Samek. Since Graduating in 2009 Jay has worked all over the world, taking part in numerous recordings and appearing as a soloist in many prestigious venues.

Joanna has recently finished a Number One UK tour of McNally’s ‘Master class’ in which she played Sharon Graham. Previous engagements include ‘Phantom of the Opera’ at Her Majesty’s Theatre, and numerous appearances at Garsington, Grange Park and Opera Holland Park. She is delighted to work with Alex Sutton again, who directed her in the title role of ‘Hello Dolly’ .

Ricky studied composition at Carnegie Mellon University. After which he quickly emerged as a leading writer of vocal music that spans art song, opera, and musical theatre. Mr. Gordon’s songs have been performed and or recorded by internationally renowned singers. Works include: Rappahannock County (Harrison Opera House), The Grapes of Wrath Green Sneekers, Bright Eyed Joy, Dream True, written with Tina Landau, States of Independence, and Only Heaven. The Tibetan Book of the Dead, written with Jean Claude Van Itallie, premiered at the Houston Grand Opera in 1996 and, and Morning Star, written with William Hoffman which Mr. Gordon wrote for The Lyric Opera Of Chicago, where he was a composer in residence. He is currently working on commissions for New York’s Metropolitan Opera with Playwright, Lynn Nottage, and a new opera for the 50th anniversary of the Minnesota Opera (Garden of the Finzi Continis) with librettist Michael Korie. Gordon is also writing a new musical for Playwrights Horizons with Richard Nelson.

Innocence in the Asylum