Why does opera have to be grand? What if it was small – really small? Just you and me…

We wanted to make opera intimate. We wanted to remove the trappings of the large scale theatre and take it right back to just the audience and the singer. So, we decided to go as small as we could, one-­‐on-­‐one.

This kind of performance has been around in contemporary theatre for a little while now and we thought it would be fun to implement it in opera. Our distinct brand of devised opera is characterised by stylised movement and electronic sound scapes. These are created through a collaborative devising process where all of the creative team and performers feed into the creation of the work.

PSYCHE is an exploration into the subconscious, into the decisions we make but cannot control and into the repressed thoughts that surface in unexpected ways. 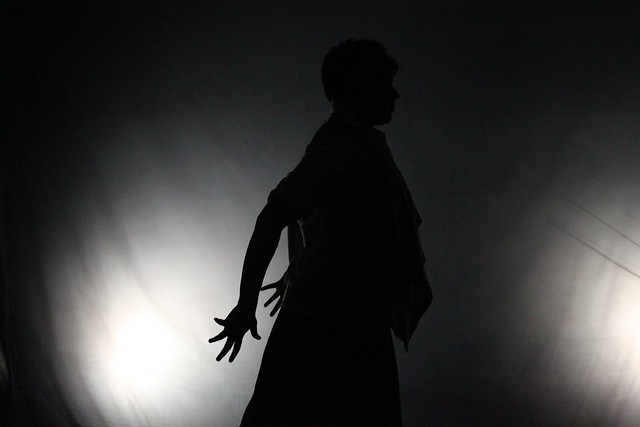 Alex Groves is a composer with a particular interest in writing music for the stage. He has worked on a number of projects with organisations such as the National Theatre, Royal Opera House and East London Dance. Other productions have included Then with Yve Blake and Hunger with Rebecca Hanbury.

Ben Behrens is a London-­‐based writer, whose work has been nominated for Best Show at the 2014 Leicester Comedy Festival and the NSDF Edinburgh Award 2013. He is an Associate of Tap Tap Theatre, with whom he has had work performed at the Arcola Theatre, Camden Roundhouse and Lyric Hammersmith Studio.

Rebecca Hanbury is a director with an interest in bringing devising, dance and electronic music into opera. Her recent work, Hunger – with composer Alex Groves – marked the start of her exploration into new ways of making opera. Previous work as an assistant director includes: Regents Park Open Air Theatre, ETO, Opera Holland Park.

Kelli Des Jarlais is particularly interested in collaboration and discovering how design can be incorporated while creating new work. She was named as an Emerging Artist by the Royal Opera House and East London Dance and selected to design Street Stories: Dance Collaborations 2014. In addition to theatre, she runs her own bespoke clothing company: Rose Noir Designs. kellidesjarlais.com rosenoirdesigns.com

Amy Insole is a theatre and movement director, recently graduated from the Royal Central School of Speech & Drama and a member of the National Theatre Young Studio. Her practice is predominately within devised and collaborative contexts, using an organic rehearsal room process strongly influenced by physical theatre and dance theatre.

Alexander Ridgers is a freelance lighting designer from Scotland, currently studying towards an MFA in Theatre Design at Northwestern University, Chicago. Alexander has lit numerous UK Touring productions, while also working with companies such as British Youth Opera, Sell A Door Theatre Co., and the Royal Opera House. alexanderridgers.weebly.com

Named as one of the most influential LGBT people in the country by The Independent, CN Lester combines a career as a classical singer and researcher with work as an alternative musician, writer and equality campaigner. Specialising in early and contemporary music, their research on castrati singers has been showcased by Classic FM, and their work with Silent Opera by Radio 4. They are a member of early music ensemble, Ursula’s Arrow and study with Alison Wells.

Chiara Vinci trained at the Rambert School and studies singing under Jenny Miller. She works accross dance, theatre and opera, as well as creating her own work. Recent credits include dancing the role of the Vixen in Daniel Slater’s production of The Cunning Little Vixen (choreography by Maxine Braham). Future performances include: Ad Parnassum and L’Offerta Musicale di Venezia’s Venis & Adonis.