This twenty minute excerpt is the first phase in the development of THEY CAME BACK. The full opera will have a cast of five or six singers and will tell the story of a handful of normal people – diverse citizens of planet Earth – struggling with their hopes, fears, doubts and beliefs as they digest, witness and experience (at first-­‐hand) a series of remarkable events. For Tête à Tête: The Opera Festival 2014, we will be making an initial foray into the story of The Journalist, a flawed everyman – simultaneously struggling with the demons of his past and the veil of misinformation and speculation that clouds his present – on a quest to uncover the truth behind the Visitations.

As well as a live performer singing the role of the Journalist, the opera features a through-­‐composed electronic music score which fuses elements of contemporary opera, synth, glitch and cinematica with found and created sound, and pre-­‐recorded text and song.

It is the near future and the world is in the grip of a compelling, supernatural phenomenon. In small but ever growing numbers, the deceased are returning, making brief visitations to their living loved ones.

What many see as a great unifying human experience – touching every member of the World’s population equally – others seek to use as a divisive tool. Desperate politicians struggle to maintain control in the face of this new, greater power. Peaceful gatherings have evolved into riots; religious marches have resulted in massacres; the news is awash with stories of mass-­‐suicide, while the World’s economies are in turmoil – as people give up on the stable lives they thought they knew and embrace this strange reality.

The Visited are an anointed, chosen few, whilst the majority hope and pray to see their loved ones again, to receive a message, to have a place in the hierarchy of this new world order. 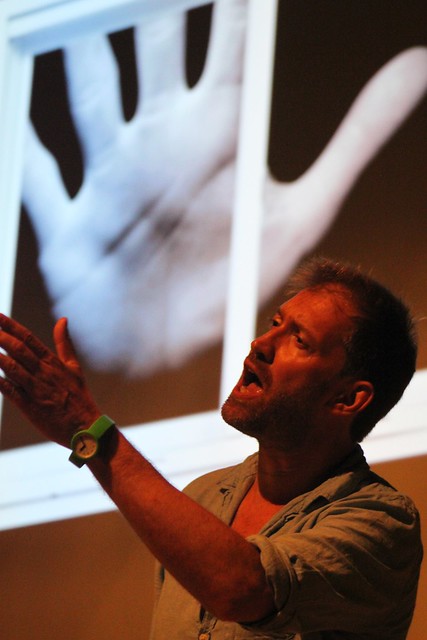 Lou Palmer began her career in theatrical lighting at The Queens Theatre (Shaftesbury Avenue), before turning to Creative Direction in the digital arts. She works across multi-­‐media environments in illustration, graphic art and video, as well as having an established career and number of releases as a singer and composer/lyricist.