Cosmica Productions is the brainchild of Johnny Guim and Ellis Freeman. Together they ran a monthly cabaret club at Turnmills Top floor for two years. Their aim is to celebrate diversity and clashes of culture in a musical context.

They have since been developing this show, inspired by Guim’s colourful life. A pilot version was performed in Nov 2011 as selectors’ choice at the G-Fest. Email – info_cosmica@yahoo.co.uk Website: www.cosmica.co.uk

A boy is born in small town Brazil on the day of John the Baptist and is given the saint’s name. After seeing a Barbra Streisand TV special he knows what he wants; to be on the stage and sing like Barbra.

When his mother hears him, she curses him for singing like a woman. After that, he can’t sing anymore. But his dream won’t die. He escapes to Sao Paolo and transforms himself into drag queen Biba Lerhue. If he can’t sing, at least he can lipsync! Johnny travels to Italy to perform but discovers his co-workers are sneaking off to work as transvestite prostitutes on the streets. Tempted by the money he creates a new character, Alessandra, and joins them.

His life of multiple identities comes to a head; Johnny is looking for love. Alessandra wants money. Biba wants to be on stage.

One night, running from the police, he gets a call; his mother has died.

In a crisis, Johnny remembers his grandmother’s words; if you sing, your troubles will leave you. 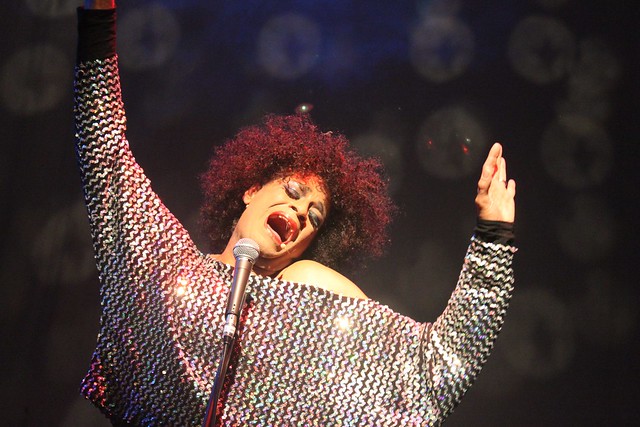 The Amazon’s
MD and vocals: Susie Self

The Amazon’s
MD and vocals: Susie Self

Johnny Guim: Performer, Words Johnny has appeared in theatre, feature films, TV and commercials in Brazil, Italy and the UK. Moving to London, he studied musical theatre and drama at the City Lit and has been training his voice with teacher, Susie Self. In 2008, he was the first Brazilian to sing on the stage at Glyndebourne in ‘Love and Other Demons’.

Ellis Freeman: Words, Producer When not producing Cosmica, Ellis Freeman is a screenwriter whose credits include feature films, ‘Princesa’ and ‘January 2nd’. He also teaches a workshop in creative screenwriting, the Writers’ Gym, at the London Film School and at the DFFB in Berlin. He lives in London with his partner, Johnny Guim.