The Francis Bacon Opera is an absurd comedy that explores the mind of one of the 20th century’s most controversial painters. Based on a particularly brilliant South Bank Show interview from 1986, The Francis Bacon Opera uses the original conversation between Francis and Melvyn Bragg word-for-word. Explosive opinions blend with tenderness and wit as alcohol dilutes Bacon and Bragg’s inhibitions. 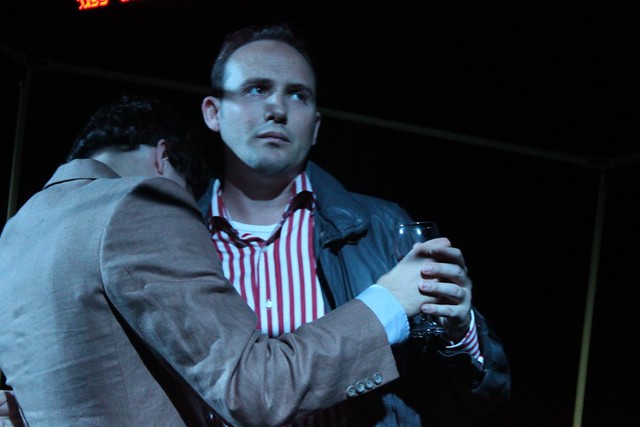 Stephen Crowe was born in Bolton, but grew up in Nottingham. He studied Fine Art and expected to become a painter until music somehow took over. He has written and directed seven chamber operas (including the ‘libretti’ for six of them) with another one currently in the offing. His work has been performed in New York, Berlin, Venice, Orëbro, Lucern, Geneva and Bern. Notable London performances have been at Tate Britain, The Courtauld Gallery, Queen Elizabeth Hall, The Vortex and Riverside Studios. He studied Fine Art at JMU, Liverpool, and Composition at Goldsmiths, London.

Christopher Killerby (playing Francis Bacon) hails from South Africa. Christopher trained and performed in musical theatre before coming to the UK ten years ago. He has since crossed over to opera and classical repertoire and has performed in Opera Holland Park for the past 3 seasons as well as various smaller opera productions around London.

Oliver Brignall (playing Melvyn Bragg) is a singer and composer. He read music to Masters Level at Canterbury Christchurch University. He is currently studying for a PhD in composition at Brunel University and collaborating on a new work with the London Sinfonietta. Recent singing engagements include Porcupine in Fantastic Mr Fox, Cover of Triquet Yevgeny Onegin and Frederico l’Amico Fritz (OHP), Gastone La Traviata (Merry Opera).

Elspeth Wilkes studied at King’s College London, Trinity College of Music and the Royal Academy of Music. She is the recipient of the Scott Huxley Accompaniment Prize and the Elena Gerhardt Lieder Prize (among many others), and has performed for the Royal Opera House, the Royal Ballet and the Royal Shakespeare Company.

Candida Powell-Williams (Set Design) is a sculptor and installation artist and enjoys collaborating across disciplines. She studied sculpture at Slade, The Royal College of Art and teaches across London. She recently received the Sainsbury Scholarship to the British School at Rome.

Justin Virdi (Set Build) studied Fine Art at Liverpool before doing his MA in Drawing at Wimbledon. He works within a wide range of mediums from drawing, painting, sculpture and film.