A Wild Evening with the Papin Sisters

An Eye for an Eye – a wild evening with the Papin Sisters, takes the true story of the two maids who committed one of the most shocking crimes in French history, and transforms it into a riotous and gruesome cabaret opera. Thrills, spills and eye-popping entertainment!

The Papin sisters were two incestuous maids in 1930’s France who gouged out their employers’ eyes and sliced through their thighs with knives, after a trivial argument over a blown fuse. All France became captivated by the case of Christine and Lea, and what could have motivated such senseless murders. We decided there was no more fitting way to delve into the minds of these disturbed young women, than with a grotesque sung cabaret…

Tonight’s performance is of the first seven short scenes. Two performers play all the characters A bourgeois house in Le Mans – 2nd February 1933

Madame Lancellin is holding a masquerade party at her house, during which she hopes to find her unattractive daughter, Genevieve, a husband. Down in the kitchen, the two maids, Christine and Lea, attend to the myriad preparations for the party. Christine works fast while Lea lags behind. The maids’ arduous work is constantly disturbed by Madame’s new electric bell. Her demands for the evening become increasingly detailed and impossible to achieve. Their endeavors are also disturbed by Genevieve, who dreams of having Lea as her personal maid, and wants Christine ejected from the house. Tensions rise as Christine rushes around covering up for Lea’s mistakes, and Genevieve stirs up trouble by suggesting to her mother that she has observed something unnatural between the two sisters. The unreliable electricity falters, and eventually fails under the strain of over-use, causing a blackout, and leading to remonstrations from Madame that the maids’ wages will be docked. In the darkness, Christine clutches Lea and discovers a pendant given to her by Genevieve. She orders Lea to fetch knives from the kitchen, and together they murder their two employers.

In collaboration with Angel Exit Theatre and Hazel Gould 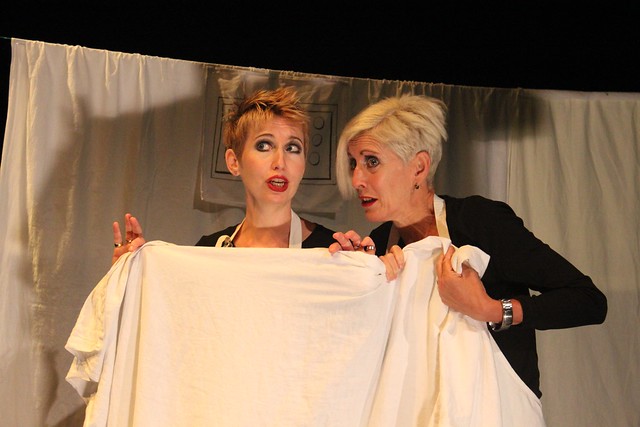 I Care If You Listen review

David Knotts came to public attention as a finalist in the first BBC Young Musician of the Year composer competition and he has gone on to write music for many of the country’s leading soloists, ensembles and orchestras. Music for the stage has included Stormlight for W11 opera,Bake for One Hour for ENO and Mister Purcell: His Ground written for the Knack.

Jessica Walker’s performing work includes roles for Opera North, Reis Opera, Glyndebourne, Music Theater Transparant, The Opera Group, Psappha. Her 2010 Opera North solo show, The Girl I Left Behind Me was co-devised by her and Neil Bartlett and toured to critical acclaim. Her next solo show, Pat Kirkwood is Angry, is an Opera North co-production with Manchester Royal Exchange

Hazel Gould is a director, writer and workshop leader. She uses her background in theatre to collaborate with musicians creating new work in a diverse range of settings, and has worked for Glyndebourne, The Royal Opera House and Opera North amongst others. In recent years she has become increasingly recognised for her writing, most notably for the RPS award winning community opera We Are Shadows.

Angel Exit Theatre is a shifting ensemble of performers with a shared passion for new dynamic physical theatre, under the artistic direction of Tamsin Fessey and Lynne Forbes. Previous work includes national tours of The Black Curtain, Moonfleet and The Secret Garden. Angel Exit’s work has a strong emphasis on storytelling through physical ensemble theatre, using the European traditions of clown, chorus and buffoonery.