Incest and murder threaten Nero’s rule over Rome. But can his portrayal of his beloved heroes, Oedipus, Apollo and Hercules, help him to coerce the citizens of Rome into accepting that his acts are connected to godliness and power? From beyond the grave, through multimedia installations, his wife and mother try to persuade us otherwise.

Fragments of Sun is a multidisciplinary opera about the life and crimes of Nero, incorporating music, dance, theatre and live film.

The rule of Nero, Emperor of Rome, was, to most historians, associated with tyranny and violence. His evil crimes and acts of debauchery included incest, murder, kicking his pregnant wife to death and ‘fiddling’ while Rome burned. What is interesting, however, is that, despite the gravity of these crimes, Nero managed to fully justify his acts and, at the same time, gain increasing popularity among his people by comparing his crimes to those of famous mythological gods – the then ‘celebrities’ of the ancient world. By presenting himself (in important speeches, through his dress, on coinage, and through theatre and circus) as his beloved heroes, Oedipus, Apollo, Orestas and Hercules, Nero managed to coerce the citizens of Rome into accepting that his acts were connected to royalty, godliness and power.

The opera explores Nero’s crimes from the perspectives of the two closest women in his life, Agrippina (his mother) and Poppea (his wife) . These women’s stories are told from ‘beyond the grave’ as a retrospective dialogue, communicating their bitter experiences after their brutal murders. 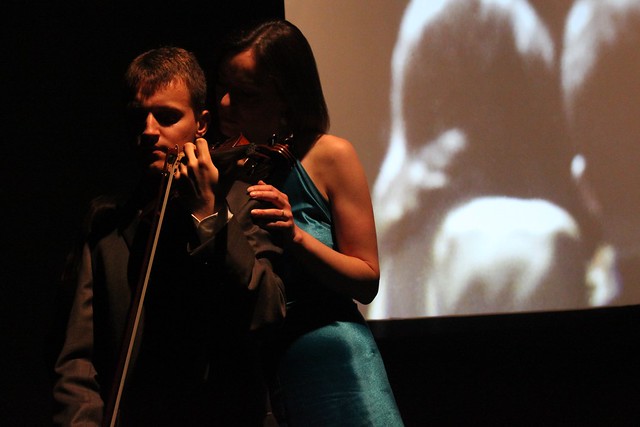 Litha Efthymiou (music) Litha studied Composition at Trinity College of Music, where she was awarded the Director’s Prize. She has since been the recipient of awards from Arts Council England, The Wellcome Trust and the National Lottery. Her music has been performed all over the UK, including at Queen Elizabeth Hall, Kings Place and the National Maritime Museum.

Effy Efthymiou (music) Effy won a scholarship to study Composition at Trinity College of Music. She has been commissioned to write music for many internationally acclaimed musicians and organisations including Ensemble Bash, The International Guitar Foundation and Westminster Abbey. She has won two international competitions and her violin and guitar duo is published by Edition HH.

James Hogg (writer/words) James is a trained actor, graduating from the Guildhall School of Music and Drama in 2006. His work includes rep, West End, and national and international tours. He also works as a freelance writer, with articles published on a number of websites, as well as a variety of performance poetry works. This is his first work for opera.

Susanna Fairbairn (soprano/Agrippina) Solo, consort and opera work takes Susanna worldwide. Highlights have included solos for John Eliot Gardiner at Cadogan Hall and in Mozart’s C Minor Mass for Sian Edwards. She recently recorded a commission for solo soprano and choir by Cecilia McDowall, and performed in Joby Talbot’s Alice in Wonderland at the Royal Opera House. She is a Park Lane Young Artist for 2013.

Michael Anthony Brown (actor/Nero) Michael’s favorite roles include National Alien Office at Riverside Studios, As We Forgive Them at the Arcola, the title role in Howard Barker’s (Uncle) Vanya, Gorey Stories, the fool in King Lear , and a three-actor adaptation of Cyrano de Bergerac . Recent film appearances include Tim Burton’s Dark Shadows, In the Interest of the Nation, and the upcoming World War Z with Brad Pitt.

Katie Pattinson (actor/Agrippina) Katie is an actor musician who trained at Mountview and Cambridge University. Theatre highlights include ‘The Tempest’ (Salisbury Playhouse), ‘A Penny for a Song’ (Whitehall Theatre), ‘All My Sons’, ‘In Flame’, ‘The Good Companions’ (Keswick), ‘A Streetcar Named Desire’ (Europe/Far East) and, most recently, ‘The Lonely One’ (The Little Angel Theatre). Screen highlights include ‘In the Name of Identity’ (BBC) and ‘Collapsed’ (Leopard Films).

Iain Gibbs (violin/Nero) Iain has performed as a soloist and with his string quartet at venues including the Royal Opera House, Kings Place and the House of Lords. He was Highly Commended for his performance in the Vera Kantrovich Solo Bach Competition, 2010 and a Finalist in the same competition in 2011. He is Leader of the Young Musicians Symphony Orchestra and performs regularly with Solistes de Musique Ancienne.

Elizabeth Exell (percussion) Elizabeth is primarily a jazz drummer and leads a 7piece swing band as well as being involved in several other projects within the realm of modern jazz. These have led to performances at reknown venues such as Ronnie Scott’s, Pizza Express and the Southbank Centre. Elizabeth is about to start her 4th year as an undergraduate at Trinity College of Music.

Montserrat Lladó Gambín (piano) Montserrat studied at the Liceu High Conservatory in Barcelona and at Trinity College of Music. She has participated in masterclasses with Paul Badura-Skoda, Edith Fischer, Wolfram Rieger and Bernd Zack among others. She performs as a soloist and chamber musician giving recitals in Liceu Hall, Petit Palau Hall, Caja Madrid Hall, Kings Place and London’s Southbank Centre. In 2010 she won the P. Vallribera Award in Barcelona.