And Then We Danced

And Then We Danced is a new collective of musicians, artists and performers directed by Victoria Bourne and Chris Harper set up to explore the ways in which the voice, electro acoustic music and spoken text can be combined to make original theatrically presented works. The Chainmakers’ Strike creates a bed of electronic sounds formed from samples of anvils, metallic percussion and female voices (including recordings of a community choir singing songs adapted for the strikers themselves, unheard in this form since 1910) upon which both sung and spoken text tell a story of huge historical significance. www.andthenwedanced.com

Women chainmakers in the Black Country in the 1900’s often started work in the forges as children and spent their entire lives making chains. They were known as the ‘Slaves of the Forge’ working fourteen hour days and earning the equivalent of 50p a week. In 1910 the women chainmakers of Cradley Heath won a battle to establish the right to a fair wage following a ten week strike that was a catalyst for what became known as the ‘Great Unrest’. It was a landmark victory that changed the lives of thousands of workers who were earning little more than ‘starvation wages’. Mary Macarthur was the trade unionist who led the women chainmakers in their fight for better pay.

The Chainmakers’ Strike is a song cycle telling their story of work, lives and the strike of 1910 through the eyes of a chainmaker and a journalist. 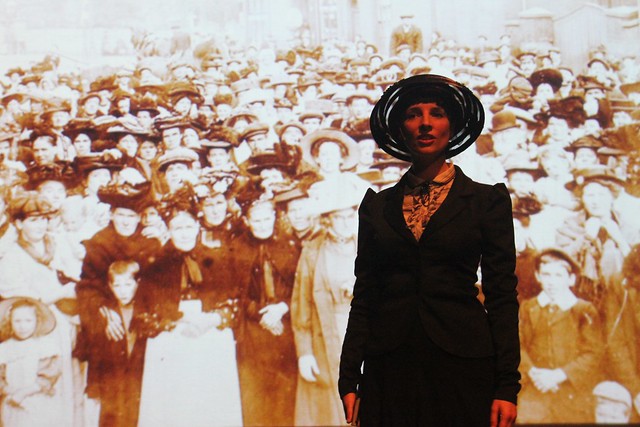 Victoria Bourne is a performer, composer and music educator performing a varied repertoire including electronic vocal, contemporary classical, experimental folk, flamenco and vocal improvisation. She is currently completing her MA Music at Bristol University focusing on voice and electronic composition. In 2012 she has performed as a soloist with the New Music Ensemble in Osvaldo Golijov’s ‘Ayre’ and Theo Loevendie’s ‘Six Turkish Folk Poems’. She has also performed her own electronic compositions at BBC Radio 4’s More than words festival and on BBC Radio Bristol. Her electroacoustic composition ‘If you hear me here’ and installation ‘The Warden’s Survey’ were featured at Bristol’s Elektrostatic festival. She also organised and performed in the Contemporary Music Venture concert series 2012 in Bristol. www.victoriabourne.com

Chris Harper is a graduate of Goldsmiths College in London with a Masters degree in Studio Composition Chris is now based in Bristol, composes music for film and theatre, teaches guitar and performs in a variety of musical guises. www.chrisharpersmusic.com