What if Miss Havisham could sing? How would one of the heroines of Dickens’ novel Great Expectations describe her fate?

Singers Melanie Pappenheim and Rebecca Askew provide the answers in Jilted, their follow up piece to Flam which was performed at Tête à Tête: The Opera Festival in 2008 and 2009.

Jilted imagines a modern day relationship between one of Dickens’s most striking characters, Miss Havisham, the aging, jilted bride and his own wife, Catherine Hogarth, from whom he separated after 19 years of marriage and ten children.

As Catherine attempts to organize Miss Havisham’s belongings in order to move house, the two women needle, irritate each other, and compete for attention. Their stories are revealed through newly commissioned vocal music as they re-enact the wedding that never happened. 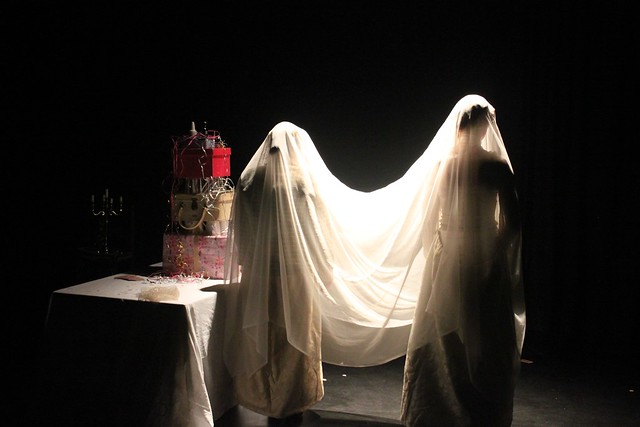 Rebecca Askew is a member of The Shout, the award-winning 16 piece vocal band. She is also a soloist with The Voice Project in Norwich and regularly performs with singer Jeremy Avis and kora player/percussionist Surahata Susso as Korasong Radio This spring she toured with Jeremy Peyton-Jones’ band Regular Music ll.

Emma Bernard has been Associate Artistic Director of Streetwise Opera since 2011. Jilted is her second devised piece with Melanie Pappenheim and Rebecca Askew following the success of FLAM.

Melanie Pappenheim has recently appeared at the Coliseum in Dr Dee, a new opera by Damon Albarn and Rufus Norris and also at the Linbury in HOME by Graham Fitkin as part of the ROH2 Operashots season. Her voice can be heard on numerous film and TV soundtracks including Gangs of New York, Eyes Wide Shut and Doctor Who.

All to Play For