After a sell-out performance at the Royal Northern College of Music, the Constella Orchestra is delighted to bring the Mermaid of Zennor to London. Based on a Cornish legend, the opera brings the mermaid to life in a dramatic collision with the 21st century, exploring the ever shifting boundaries of memory, myth and reality.

Genesis: Last year, Leo Geyer and Martin Kratz were awarded the Rosamund Prize for their collaboration on a vocal piece. After this success they decided to collaborate again, writing an opera based on a Cornish legend. The Mermaid of Zennor was premiered in a sell-out performance at the Royal Northern College of Music in December 2011. The opera received another successful performance in June as part of Manchester University’s Music Festival.

The Legend: In the Cornish legend, a mermaid becomes entranced by the beautiful singing of a young fisherman called Matthew Trewhella. Every night in the local church, Matthew sings the evening hymn. The mermaid, Morveren, comes in disguise and listens. She always leaves before the end of the hymn and although they never speak, the couple fall in love. One night Morveren accidentally lingers. In her ensuing rush to leave, she trips and exposes her tail. Matthew declares his love for her and returns with her to the sea. Local fisherman claim that, on certain nights, you can still hear Matthew singing over the waves.

Synopsis: In this retelling of the legend, Matthew is washed up unconscious on the shores of modern day Pendour Cove, Zennor. His lover, the mermaid Morveren finds him, but is disturbed by a walker and hides. When Matthew wakes, it appears he has lost his memory, although he gradually recalls meeting someone at the beach and fragments of an old hymn. Matthew’s fixation with the water leaves the walker concerned about his state of mind, but she reluctantly goes to get help. The mermaid remains hesitant to reveal herself. Finally, some broken shells in Matthew’s hands remind him of the pattern of scales on the mermaid’s body. When she does reveal herself, Matthew is taken aback, but eventually regains his full memory of their life together. The walker returns to find a single pair of footprints leading into the sea, it seems that Matthew has given himself up to the water. In her grief she sings the fisherman’s hymn, accompanied by the distant sounds of Morveren and Matthew across the waves. 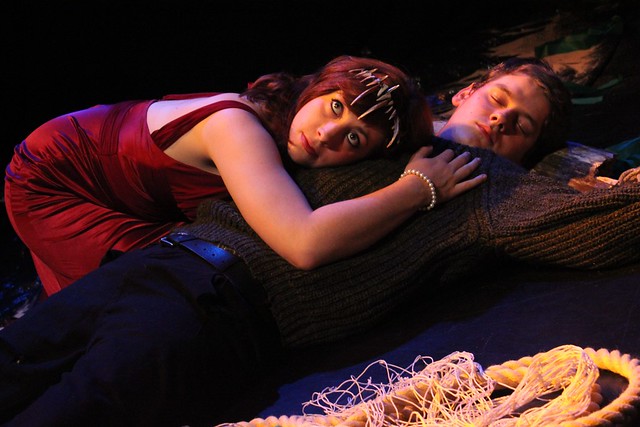 Leo Geyer is currently on his 3rd year on the Joint Course at Manchester University and the Royal Northern College of Music, where he is studying Composition with Dr. David Horne and Conducting with Mark Heron. Recent projects include a commission for the Olympic 20×12 New Music Weekend at the Southbank Centre, an operatic aria for Opera North and a solo piano piece for the Bridgewater Hall Debussy Festival.

Martin Kratz is a PhD student at MMU. The libretto for this opera formed part of his Master’s thesis. Martin also works in schools as a creative writer and has read at the Didsbury Arts Festival and the Royal Exchange Theatre.