We (Hel & CN) had long wanted to collaborate on a piece exploring difference and looking. WithTHE LION-­‐FACED MAN, we felt there was an opportunity to tackle the audience’s assumptions and completely reverse them. Instead of watching a captive performer, the audience is made captive themselves – strapped into a viewing headset, unable to look away as Stephan Bibrowski, the lion-­‐faced man, stares them down. The singer barrels through a litany of characters – doctor, ringmaster, narrator, side-­‐show spectators, the titular man himself – one single voice contorting through speech and song to populate Stephan’s world. How does looking change the substance of what we see, and how are we changed in the looking? Where does biography end and fiction begin?

Billed as ‘Lionel the Lion-­‐Faced Man’, Bibrowski became one of the most famous performers of the Golden Age of sideshow – but he left us no interior record of his life.

What makes us think we can know the man beyond the legend?

How would we look at others, if we couldn’t look away? 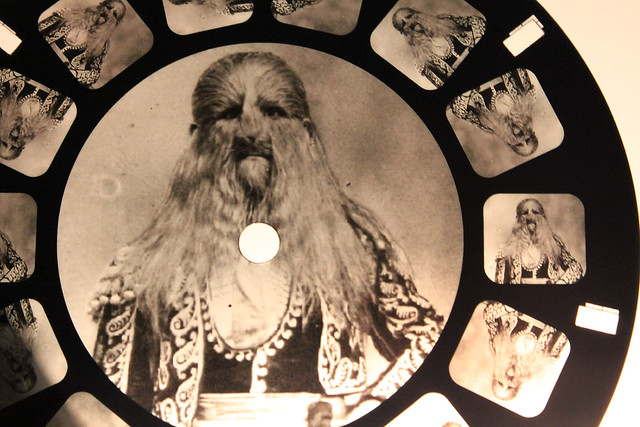 CN Lester is a classical vocalist and researcher, a singer-­‐songwriter and writer. Previous venues include Tate Modern, BFI, the British Library and Channel 4. Their first non-­‐fiction book and third alternative album are both scheduled for release in Autumn 2016. More information at: www.cnlester.com.

Hel Gurney is a performance poet, fiction/non-­‐fiction writer and researcher in gender and literature. Their works have been featured/performed in venues including Somerset House and Trans Pride Brighton,and they have contributed to publications such as Other Countries: Contemporary Poets Rewiring History, Poems for the Queer Revolution and Feminism and Psychology.

‘Alison Wells, the outstanding mezzo who has distinguished herself in the field of contemporary music’ – Opera Magazine. ‘Stunning’ – Radio 3. Alison Wells has appeared in all the major London concert halls and in many festivals at home and abroad. She has broadcast many times for Radio 3.

Anna Kirkpatrick graduated from GSMD in 2000 with an MMus in Advanced Instrumental Studies, with honours for performance. Anna has worked as a live and session musician with artists including Paul McCartney and Florence and the Machine. Freelance orchestral work includes: Leader, Wilderness Festival Orchestra, Symphony Orchestra of India, Southbank Sinfonia. Chamber music work includes Leader of Auriga Strings, member of Blaze.

Timothy Thornton is also a composer and writer. He founded Ensemble Lagan to work on they heavily vanish, a sea-­‐masque using text from The Tempest, premiered this August at Tête à Tête: The Opera Festival 2015. His

most recent writing was for David Hoyle’s showIllustration. His book Working Together For A Safer London is forthcoming from Barque Press.

Edward Furse was a member of the RTE National Symphony Orchestra of Ireland for three years, before returning to London in 2012. Recent performances have included the solo part in Dvorak’s cello concerto, a BBC prom with Camerata Ireland, and chamber concerts with Craig White and the Olive Piano Trio.