Minerva Scientifica is an evolving music-­‐theatre programme reflecting the lives and work of British women scientists told through the music of British women composers. This electric voice theatre initiative sets out to look at the links that exist between women scientists both in history and the present day, and to find ways of increasing public engagement with the physical science and with the issues encountered by expert female scientists through a parallel exposure to women composers and artists. electric voice theatre is currently developing The Franklin Effect at King’s College London (engaging four composers mentored by Judith Weir, four female scientists and four singers) inspired by Rosalind Franklin (molecular biologist, crystallographer) whose photo 51 was the key to unlocking the mystery of the structure of DNA. Future projects include Cambridge University – featuring Maria Theresa Agnesi (composer), her sister Maria Gaetana Agnesi (mathematician) and Elizabeth Tollet (poet) – and Birds & Bees at Newcastle University with Helen Papaioannou (composer).

MIRIAM is for solo voice and bass clarinet (30mins), by Karen Wimhurst, in association with Peter

MIRIAM is a celebration of the eminent entomologist Miriam Rothschild, with the libretto compiled from Miriam’s own writing. Book-­‐ended by the formal gardens of childhood through to the wildflower and grass gardener of her later years, the piece seeks to weave Rothschild’s passionate and uniquely faceted life as scientist, campaigner and seeker of poetic truth into an impressionistic whole. The music is structured episodically: single sections on Butterflies and her Jewish Inheritance are interspersed with two developing themes on research into Fleas and the Garden. 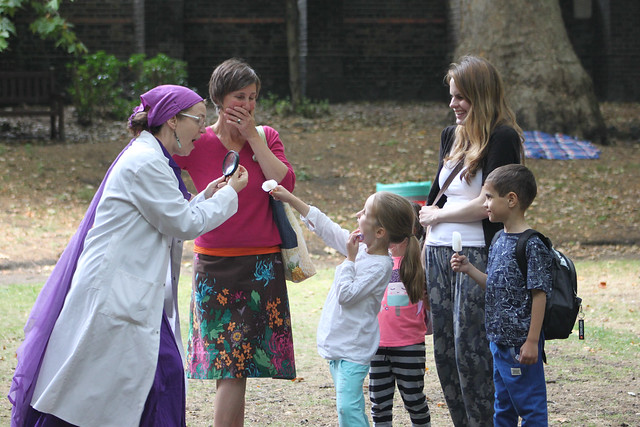 Peter Smithers is an entomologist based at Plymouth University. He has studied spiders for the last twenty years and has also been a keen advocate of linking the arts and sciences. The libretto for MIRIAM is the latest in a series of sci-­‐art projects that he has been involved in.

electric voice theatre is a world class contemporary music-­‐theatre ensemble, helping others to join the adventure that is new music. electric voice theatre has been active as a multi-­‐disciplinary music-­‐theatre ensemble of singers and designers for sound, light and stagesince 1985. Its work includes award-­‐winning film, TV and performance projects, extensive worldwide touring, Minerva Scientifica, The Great Tapestry of Scotlandand, currently, a Gamelan Dubstep collaboration. www.electricvoicetheatre.co.uk

Frances M Lynch – Artistic Director of electric voice theatre – has pursued an international career in contemporary vocal music, specialising in music-­‐theatre, electronic music, opera, and chamber music. She has also sung Scottish Traditional, Pop and Rock music and made performances with art exhibitions, including one by Tracey Emin.

Miranda Melville studied at the Motley Theatre Design Course with Percy Harris, and designs extensively for theatre (including Bobby Baker’s How to Live, Barbican Theatre), opera (including Britten’s Owen Wingrave), film (including the Cholmondeley’s and Featherstonehaugh’s Cross Channel) and dance (including work with V-­‐TOL). She co-­‐designed a gold medal-­‐winning garden at Chelsea Flower Show.

Elizabeth Dawson is Pathway Leader in Costume Interpretation at Wimbledon College of Art, University of the Arts London. She is an expert on historical British costume (particularly the Royal Family) and on dressing chimps (PG Tips adverts!).

Dr Ruth Gilbert has lectured at the University of Winchester since 2001. Her doctorate focused on early modern representations of the body, sex and gender. Recent research focuses on the representation of British Jewishness in contemporary literature and culture. She is Co-­‐convenor of research network BJ:CC (British-­‐Jewish contemporary culture).