In light of Shakespeare’s 400th anniversary, award-winning quartet The Hermes Experiment (harp, clarinet, soprano and double bass) have developed a new interpretation of Shakespeare’s The Winter’s Tale during an Aldeburgh Music Residency. Reducing the play to an hour’s duration in collaboration with director Nina Brazier and composer Kim Ashton, the quartet of musicians become part of the drama alongside a group of actors.

Produced by The Hermes Experiment

Following a sell-out premiere in December 2016, The Hermes Experiment (harp, clarinet, soprano, double bass) return with their one-hour long version of Shakespeare’s The Winter’s Tale to perform for the first time at Tête à Tête Opera Festival on 11 August 2017.

With the play reduced to an hour’s duration, achieved in collaboration with director Nina Brazier and composer Kim Ashton, the quartet of musicians become part of the drama alongside a group of five actors. The work was first developed during a very successful Aldeburgh Music Residency in September 2016.

As a group dedicated to pushing the boundaries of their craft, this is The Hermes Experiment’s first project involving theatre. The musical nature of the play lends itself to a fluidity between the musicians and the actors; it is not just a play with music, but an organic marriage of the two art forms through Shakespeare’s plot and words. The music is in part composed, in part devised, and in part improvised, all in response to the demands of the text and the drama, illustrating the collaborative nature of the project. 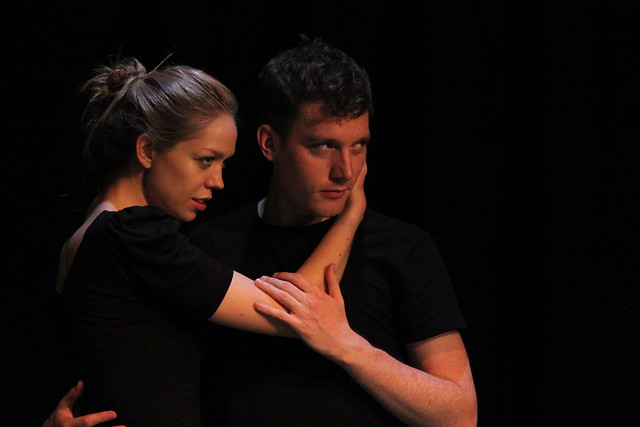 Kim Ashton is a composer, conductor, teacher and garden designer. Recent works have been performed by the LSO, Ensemble InterContemporain, OAE, Orchestra of Opera North and Orquestra Gulbenkian. RPS award winner Clare Hammond is currently touring his recent piano piece Ornithology. With a PhD from King’s College London, Kim is a visiting lecturer at Cambridge University.

Sophie Mosberger graduated from the Royal Welsh College of Music and Drama with a distinction in Theatre Design. She is a 2007 Linbury Prize finalist and recipient of the ROH Bursary. Designs include Anna Karenina (Bristol Old Vic), Les Nuits d’été (ROH, Linbury Studio), Dido and Aeneas (International Bath Music Festival).

Hanna Grzeskiewicz works freelance in production, concert management and PR, specialising in contemporary classical music. She has worked for such organisations as Shadwell Opera, Nonclassical and the EFG London Jazz Festival, and is co-director of The Hermes Experiment. Hanna is currently studying for an MA at Humboldt University in Berlin.

The Hermes Experiment Winners of the Tunnell Trust Awards 2016, Park Lane Group Young Artists 2015/16 and winners of Nonclassical’s Battle of the Bands 2014, The Hermes Experiment is a contemporary quartet made up of harp, clarinet, voice and double bass. Capitalising on their deliberately idiosyncratic combination of instruments, the ensemble regularly commissions new works, as well as creating their own innovative arrangements and venturing into live free improvisation. So far, the ensemble has commissioned 40 composers at various stages of their careers. The Hermes Experiment has established itself on the London contemporary classical scene, with regular performances across the city for organisations including Nonclassical, Kammerklang, Listenpony and Bastard Assignments. Recent highlights include a showcase performance at Tallinn Music Week 2017 and the ensemble’s debuts at Southbank Centre and Kings Place.

Robert Willoughby trained at L’École Jacques Lecoq. Theatre includes The Two Gentlemen of Verona, As You Like It and Stig of the Dump at the Grosvenor Park Open Air Theatre, Chester; The Adventure at the Lyric Hammersmith; Grimm Tales at the Bargehouse; Pope Joan, Tory Boyz, and Relish for the National Youth Theatre

Louisa Hollway trained at the École Jacques Lecoq in Paris on the 2 year ‘Cours Professionnel’ after a degree in French and Spanish from Oxford University. Theatre includes: Yokai (The Tank Theatre, New York), Every You Every Me (Salisbury Playhouse), BUTTER (Vaults Festival and Winner of ‘Outstanding New Work’ Award) and Blood Wedding (Cervantes Theatre). She is currently writing her first full length play.

Heloise Werner French-born, Héloïse Werner was one of the four shortlisted nominees in the Young Artist category of the Royal Philharmonic Society Music Awards 2017. She is also a keen cellist, composer and improviser, and has been awarded a residency at Snape Maltings to develop her new solo show, which she is writing with Octavia Bright.

Oliver Pashley is a London-based clarinettist and founding member of contemporary quartet The Hermes Experiment. He plays regularly with orchestras and ensembles including the Royal Philharmonic Orchestra, Britten Sinfonia, the Philharmonia Orchestra and the BBC Symphony Orchestra. He has performed at the Schleswig-Holstein, City of London, Cambridge, and Deal festivals, and recently performed in an acclaimed revival of Peter Shaffer’s play Amadeus at the National Theatre.

Anne Denholm is one of Britain’s leading young harpists, and in 2015 was appointed Official Harpist to HRH The Prince of Wales. She is a founding member of contemporary quartet, The Hermes Experiment, Principal Harp with Ensemble Cymru, and freelances with orchestras and choirs across the UK.

Marianne Schofield is committed to presenting new music in an engaging way and is a passionate exponent of the double bass in contemporary settings. As well as being a founder member of The Hermes Experiment, Marianne enjoys performing contemporary and twentieth-century works on a larger scale through her freelance orchestral and chamber work, most recently with Aurora Orchestra, Chroma, BBC Philharmonic, and the RPO.

Thanks to: We would like to thank St Martin’s (Gospel Oak), the Royal Opera House, Emma Werner, as well as Snape Maltings and all our funders: RVW Trust, Arts Council England, Britten-Pears Foundation and Hinrichsen Foundation. And huge thanks to Tête à Tête: The Opera Festival 2017 for having us!

As I Have Now Memoyre

The North Wind Was A Woman & Dhyana