Thrashing the Sea God is heavily influenced by John McLeod’s extensive travels throughout China, Malaysia, Indonesia (Sumatra, Java, Bali) and interest in Cantonese Opera. A genuine operatic story – adapted from a traditional Cantonese libretto – is recreated for a solo percussionist who, in the costume and manner of a principal soprano (male) of the Imperial Chinese Opera of Canton, sings and plays his/her way through the story.

This mini opera tells the story of a man who deserts his wife for another woman and becomes First Scholar – the highest accolade for scholars in ancient China. Overcome by disappointment and grief his wife, Jing Yanfa Dan, decides to kill herself. The scene takes place just before her death when she has received a letter of divorce from her husband. She rushes to the Temple of the Sea God where she and her husband once pledged their love for each other. In a state of shock she reprimands the Sea God for being unconcerned about her husband’s act of infidelity and for allowing it to happen.

Translations from the Cantonese (in order of singing):

Thrashing the Sea God was commissioned and premiered in February 2000, this current production was born from Joby Burgess’ April 2011 performance – produced by ECAT at the Queen’s Hall, Edinburgh. 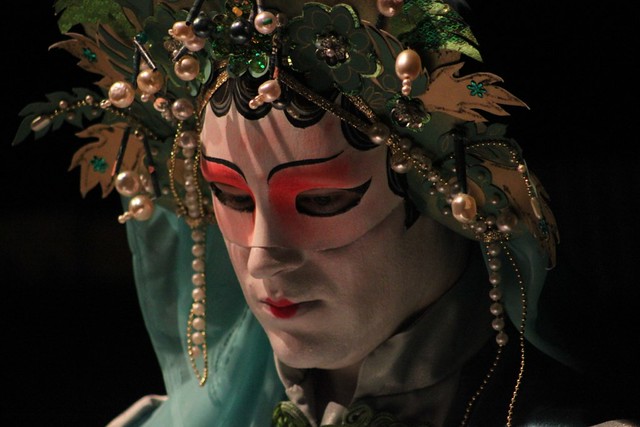 One of Scotland’s foremost composers, John’s award winning works have been performed and recorded by leading orchestras

including the Philharmonia, Halle, BBCSSO, RSNO as well as orchestras in Germany, Poland and the USA. His music has been

championed by musicians such as Peter Donohoe and Jane Manning and been featured at festivals including Edinburgh, St Magnus

and the BBC Proms.

Kally trained as a dancer and has a MA in English Literature and Film Studies. She is a director, choreographer and dancer in the UK and internationally. Directing credits include Scottish Opera, Bloomsbury Opera and The Royal Conservatoire of Scotland and she was recently awarded a Herald Angel for directing The Seven Deadly Sins for Scottish Opera and Company Chordelia. www.kallylloydjones.com