I have an enduring fascination with clowns, and an abiding desire to blur the gap between music and theatre by composing in both languages. Meeting Alban and Marcelo inspired Musical Moments. My Voice and Me was my long-­‐term collaborator, Chris Newell’s idea; it was commissioned by the University of Hull, in collaboration with the CreST Network, and premiered in Scarborough (January 2013). 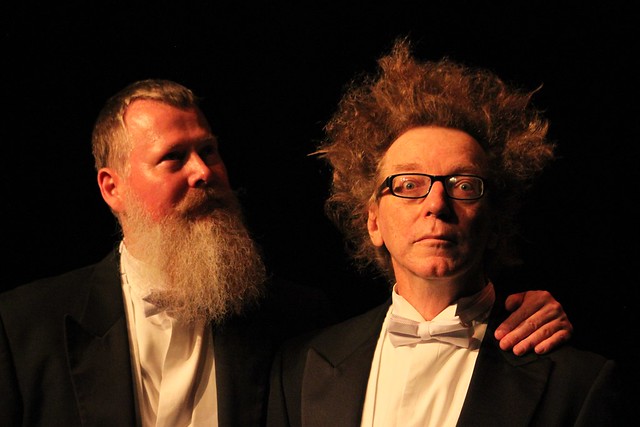 2)    My Voice and Me Piano: Oliver Curry Soprano: Maria Bovino

2)    My Voice and Me Piano: Oliver Curry Soprano: Maria Bovino

Paul Barker is a composer of concert music, vocal music, theatre and opera, whose works have been performed worldwide, El Gallo (an opera without text) has been performed over 100 times, and recorded for TV and CD by Teatro de Ciertos Habitantes. He is the author of Composing for Voice (Routledge), and Professor of Music Theatre at the RCSSD.

Marcelo Beré was born in Brazil on St Gorgonio’s day; thus, Gorgonio became Beré’s clown name. Beré has been performing as Gorgonio for 30 years with his company: Circo Teatro Udi Grudi. Udi Grudi performs all over the world with its own brand of Musical Eccentrics. Beré is currently based in London studying for a PhD in clowning.

Alongside performances of standard works, Stephen Coombs has an impressive reputation for championing the rarities of piano repertoire. His international career has seen him embrace many aspects of pianistic activity; he has performed as a soloist, accompanist, chamber musician and duo-­‐pianist. He broadcasts extensively for the BBC, and has been critically acclaimed for many commercial recordings on the Hyperion label.

Chris Newell is an opera director and researcher in artificial voices. After completing a PhD in Computer Science (University of York), he was awarded a Wingate Scholarship to research computer speech and melodrama. He is co-­‐recipient of an EPSRC grant to develop the Creative Speech Technology (CreST) Network.

George Newell is a freelance writer. He graduated from the University of East Anglia in 2011, with a BA (Hons) in English Literature with Creative Writing. My Voice and Me is his first melodrama. He is currently working on a novel.

Leo Sykes is a theatre director, specializing in comic shows. She has been the Director of the Brazilian clown company Udi Grudi since 1998, and visiting Director of Danish theatre company Teatret OM, since 1994. Her shows travel the world. She also writes scripts, makes films and has worked as an Assistant to Eugenio Barba.