WAXWINGS is the latest opera to be commissioned by English Touring Opera for young people with severe special educational needs, and is its first electro-­‐acoustic opera. It follows Rumbled in 2014, Spin in 2013 and RedBlueGreen in 2012. WAXWINGS toured the UK in Spring 2015, with performances in special schools up and down the country. It has also had a run of performances at the Philharmonie in Luxembourg. The opera has been specially adapted for Tête à Tête: The Opera Festival 2015 to appeal also to an audience of young children and their families. WAXWINGS is designed to engage directly with every member of the audience.

Olly and Cilla are brother and sister. Olly loves birds but everything else scares him, especially school, and he depends on Cilla. Olly has overslept and they are late for their first day at a new school. At the bus stop they meet a woman who has a bird in a cage. It is a waxwing. The woman lets them buy it. They teach the waxwing about how to survive in the city and take it to the school with them. Mrs Buzzard is their new teacher, andshe dislikes Olly immediately. When she finds out there is a bird in his pocket, she calls for the head teacher. Cilla and Olly decide the only way for them to escape is to make wings made of feathers and wax. 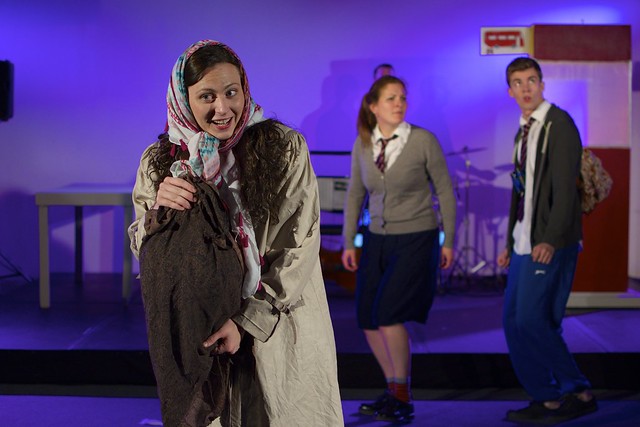 Brothers Mark and Clive Ives (of Woo Music) have been recording for four decades. They combine acoustic instruments with electronics in ways that leave the listener often wondering how the music was created. Their sound has been described as pastoral, ambient and new age, simultaneously Caribbean, Balkan, Parisian, jazz with psychedelic improvisations, and as pop music for another universe.

Tim Yealland loves to make stories that are exciting and unusual. He has made operas about the first dog in space, a cat that travelled to the Antarctic, and about a monster covered in feathers. There was a flock of waxwings in his garden in London, but there was also Tim’s cat… So he got the idea for WAXWINGS!

Ruth Paton’s work includes designs for the RSC/CLS, the RNT, Hull Truck Theatre, Live Theatre Newcastle, BAC, OSD and puppets for Bregenzer Festspiele. Designs for community and children’s opera include work for Opera North, ENO, ROH and the Wigmore Hall. This will be Ruth’s tenth children’s opera for ETO.

Babis Alexiadis is an animator and media artist, and works mainly with traditional 2D animation, cut out, and stop frame, creating moving images that feature drawings, collage, found objects and everyday materials. Recent work includes animation for Ron Arad’s 360° installationCurtain Call and for the award-­‐winning For The Best at the Unicorn theatre.

Guy Elliott (tenor) has played lots of different characters on stage including an evil king of Babylon, a knight who dresses up as a nun and even Aladdin. Apart from singing and dressing up, Guy enjoys cooking, exploring London with friends and his twin sister, and trying to grow vegetables in his tiny garden.

Emily Blanch is a soprano from Melbourne, Australia. She has lived in London for six years but still loves visiting her family in Australia in January for summer holidays. Aside from singing, Emily enjoys running, swimming and eating cheese. She also nannies for young children and dog sits.

Katie Grosset (mezzo-­‐soprano) grew up in Edinburgh and studied to be an opera singer in London and Belgium. Before becoming a singer, Katie studied at university to be a composer… then she changed her mind! As well as singing, Katie enjoys walking, cooking, running and reading. Katie loves flying but hates aeroplanes!

Jonathan Kitchen started to play the cello when he was seven. He discovered he loved music, so decided to move to London to study at the Royal College of Music, which is a bit like Hogwarts without the wizards! Since college, Jonathan has played all around the world with famous orchestras, been in films and on television.

Ricardo Campos comes from Porto, in Portugal. He fell in love with dancing when he was very young, and desperately wanted to go to dance school, even though it was an unusual job for his family. He loves break dancing and practises every day and everywhere – on the beach, on the street, and even in shopping centres!