I first conceived THE WATER PALACE about eight years ago as a tone poem with narrative interludes, based on a dream-­‐like fairy tale by Rabbi Nachmann of Bratslav in which a young girl is murderously pursued by her jealous husband, a king, and finds sanctuary in a mysterious and wondrous place, the Water Palace. Years later, when a dear friend described a haunting dream about being trapped in a mental hospital, it made sense to write an opera combining these two elements. Having cared for relatives who use NHS mental health services, I was keen both to channel some of my experiences and provoke discussion about a subject that is still taboo and tends to be hidden away. In Act 3, I have dramatised voice dialogue work, an exciting new technique whereby a patient can express their distressing voices directly to a third party.

In the opera, after a bruising interview with her doctor, the heroine Marina identifies so strongly with the Water Palace story that she becomes a part of it: it becomes her total reality. One of the other patients, Charlie, becomes her friend and mentor, both in the world ofthe hospital and that of the Water Palace.

The hospital environment in which the patients are expected to jump through hoops before they are considered well enough to leave is also a reflection of modern society, where the pressures to conform are enormous. 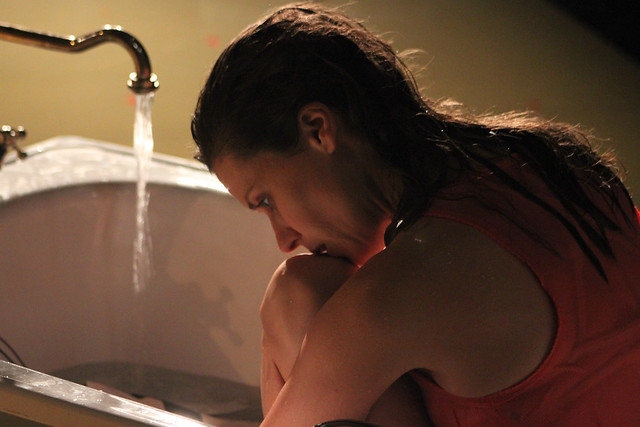 Stephen Shulman attended the Purcell school and RAM. He worked with the Netherlands Ballet in Amsterdam before joining the Orchestra of Opera North. He plays in chamber ensembles, gypsy and klezmer bands. Recent performances of his compositions include settings of Sylvia Plath poems sung by Paula Sides andSarah and Isaac.

Sam Brown is a theatre and opera director. He trained on the MFA in Theatre Directing at Birkbeck College and was Assistant Director at West Yorkshire Playhouse and Opera North. In 2011, he won the European Opera Directing Prize and the Ring Award. This is his first collaboration on a libretto.www.slbrown.co.uk

Nicholas Pitt trained at Bikbeck on the MFA in Theatre Directing. As an assistant director, he has worked with Roxanna Silbert, Paulette Randall, Michael Vale, Nick Walker and Pete Rowe(Birmingham Repertory Theatre). He is a Creative Associate at Idle Motion, who – with the British council – have toured their work all over the world.

Andrew Leveson recently returned to the theatre as a producer, following several years as a commercial lawyer. He has worked as a director and assistant with companiessuch as ENO. He is currently working with Nick Starr and Nick Hytner at London Theatre Company and recently attended the Stage One workshop for new producers.

Jonathan Gale studied conducting at the St Petersburg Conservatory. He was repetiteur/pianist for Tête a Tête’s very first productions in 1998-­‐2000. He has been a prompter for the Royal Opera, chorus master for Grange Park Opera, repetiteur at Salzburg and assistant conductor at the Aix festival and ETO.

Benedict Nelson is one of the most exciting singers of his generation and has attracted comparisons to Gerald Finley and Simon Keenlyside, among others. Next season’s plans include a Salzburg Festival debut, as well as operatic debuts in Torino, Hamburg and New York.

Alyson Zuntz is a member of the BBC Philharmonic and a freelance violinist. She has played in and organised workshops in prisons and is currently exploring the world of jazz with the help of jazz pianist Jean-­‐Claude Orfali in Paris.

Mark Bennett studied for his undergraduate and postgraduate degrees at the Royal College of Music under the tutelage of Tim Jones, John Ryan and Jeff Bryant. Since finishing his studies, Mark has been freelancing with many of the UK’s top orchestras.