As women’s boxing is included for the first time at this year’s Commonwealth Games, Size Zero Opera brings together women boxers, composers and conductors for an evening of contemporary, highly physical and challenging music-­‐theatre. Training is the Opposite will explore confrontation and liberation through boxing, paralleling the crusade for emancipation from draconian attitudes and inequalities: “women can’t/shouldn’t fight”. Ex #3 World Female Boxing Champion, Cathy “The Bitch” Brown has been training mezzo-­‐soprano, Laura J Bowler and working as choreographer for this piece. Women Conduct will provocatively examine what it means to be a female conductor in modern society: addressing her rise to the podium, the stereotypes that plague her, and her place and perception in a leading, male-­‐dominated role. Outstanding, contemporary music specialists, the Bozzini Quartet have flown in from Canada (another Commonwealth country) to premiere these exciting, innovative works with Size Zero Opera. They will further delight audiences with powerful performances of two rarely performed, exquisite, iconic Kagel quartets – as bookends to the production. This is an evening of the unexpected – of developing the physicality of opera through sport and the art of sport through music. 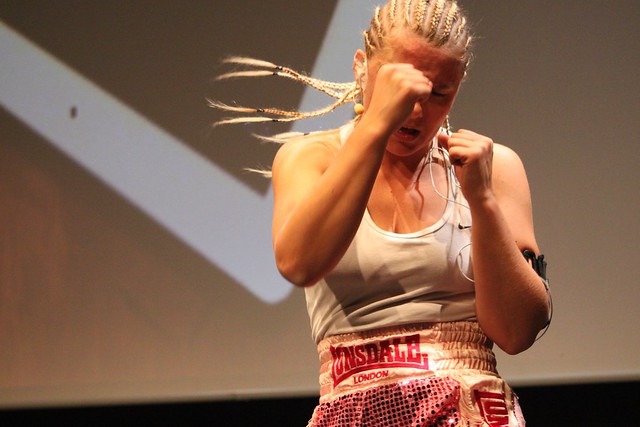 Training is the Opposite
Music & Words: Jennifer Walshe

Size Zero Opera is the only company in the UK committed entirely to commissioning and producing new opera, written by emerging composers, with emerging artists, and have grown to be recognised as “holding the torch for the future of new opera” (Classical Music Magazine, 2011). Our mission is to celebrate the work of emerging opera creatives and engender an inclusive, socially-­‐relevant, sustainable future for new music-­‐theatre. Size Zero Opera has been resident at Tête à Tête: The Opera Festival since the company’s inauguration in 2007.

“The most original compositional voice to emerge from Ireland in the past twenty years” (The Irish Times) and “wild girl of Darmstadt” (Frankfurter Rundschau), composer and performer Jennifer Walshe was born in Dublin, Ireland. Her music has been commissioned, broadcast and performed all over the world.

Laura J Bowler is an accomplished composer, opera and theatre director, mezzo-­‐soprano and conductor. Laura is founder/Artistic Director of Size Zero Opera. She is currently Professor-­‐of-­‐Composition on the new MA in Opera Making course at GSMD and Sound and Music Embedded Composer-­‐in-­‐Residence with Manchester Camerata.

Sam Redway is an actor, writer, theatre director and collaborative theatre-­‐maker/practitioner. He is

currently training on the MA Theatre Lab course at RADA. This is Sam’s first opera libretto.

Building an uncompromising and diverse repertoire, the Bozzini Quartet has commissioned over 140 works since 1999. The guest of many international festivals, they also feature various composers on their Collection QB label. Integral to their work is the collaboration with tomorrow’s generation of composers through Composer’s Kitchen and Bozzini_lab workshops.

Matthew Monaghan’s directing credits include: Passion and Resurrection, Viagron, Kettlehead, The Two Noble Kinsmen, Crave, Penetrator, Vincent River, Measure for Measure and The Bloody Chamber. He is Size Zero Opera’s Director-­‐in-­‐Residence. He has worked on the directing staff at ENO and Mahogany Opera Group.

Cathy Brown spent ten years at the top of her field in arguably the most demanding sport there is: boxing. During her professional career, she was ranked world #3 and held European and English titles. Shecurrently works as a coach and cognitive behavioural therapist atThe Third Space Gym. cathybrown.co.uk

Ottavia Virzì is a set and costume designer. She was born in Rome, where she graduated in History of Arts and continued with comparative studies between Visual Arts and Performing Arts. She is currently in the second year of the post-­‐graduate course in Theatre Design at RADA.

Born in Verona in 1988, Carlotta Merazi is a London based video artist with an optimistic outlook. Her creative curiosity has travelled with her through the years – from studying design at the School of Visual Arts, New York to Cinematography at the MET Film School. She is currently running her own production company.

James Parker is currently studying Technical Theatre and Stage Management at RADA. He will be focusing on Stage Management before he graduates in July 2015. He recently worked on4.48 Psychosis (Stage Manager) and High Society (Assistant Stage Manager). This is James’s first opera and he looks forward to doing more.

Amanda Carrick is an experienced singer, editor, project manager and producer. She graduated from KCL with an MA Musicology (distinction) in 2012. Research interests: late nineteenth-­‐century opera, contemporary opera and electroacoustic music-­‐theatre. She is Assistant Company Manager & Head of Development for Size Zero Opera.