In 2009, when Jade Goody was dying of cancer, Afsaneh became fascinated by an image in a magazine: Jade getting married, jaundiced yellow, bald, hiking up her wedding dress to show her stockings. There was something gothic about it, somehow operatic. So she found Erick and asked him if he wanted to collaborate with her and produce an opera. Yes, he said, as long as it’s not about Jade Goody.

When Jade Goody died in 2009, her death was consumed like one more episode of the reality television that had created her. She was the symbol of the Big Brother generation, the first reality TV star to get widespread recognition, with crews from the United States, Germany, and elsewhere standing outside her house, reporting on her final hours. Articles were written with titles such as “How Death Will Come”, wherein a doctor predicted in what order Jade’s organs would pack up and how she would feel as they did; the quote “KILL ME NOW” was emblazoned on the front cover of The Sun. Apparently, we couldn’t get enough of this grim ending for the girl who’d “made it”. Part account of the way her life and death were reported, part modern-­‐day fairy tale, AND THE CROWD (WEPT) explores the emptiness at the heart of the celebrity dream. The story is told by a narrator and three women who attempt to piece together, and inhabit, the tale of this woman – a woman not once referred to by name.

This is not the story of Jade Goody. Of the woman she was, or even of the life she led. It is the story of celebrity.

(Please note that this is a first-­‐stage production of an opera that is still in development.) 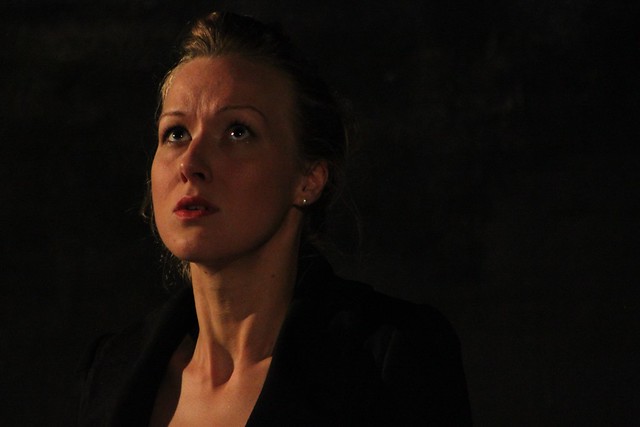 Erick Flores is a postgraduate student at the Royal College Music, under composer Kenneth Hesketh. His works have been performed by, amongst others: the London Philharmonic Orchestra, L’Orchestre Philarmonique de Radio France, The New Perspectives Ensemble and The Mercury Quartet. They have also been aired on BBC Radio 3.

Adam Gatehouse is Editor Live Music at BBC Radio 3, and founder of their New Generation Artists scheme. He was Music Director of the Dutch National Ballet and Dutch National Youth Orchestra. He has worked internationally with orchestras, as well as at the Royal Opera House, and with soloists including Felicity Lott and Nicola Benedetti.

Georgia Lowe was a Linbury Prize for Stage Design Finalist (2011) and was shortlisted for The Jocelyn Herbert Award (2011). She was Trainee Designer for the Royal Shakespeare Company (2011–2012). Recent designs include: Say It With Flowers (Sherman Cymru), Facts (Finborough Theatre), Lift (Soho Theatre), Ignorance (Hampstead), and Pericles (RSC).

Rudabeh Gray is a student at Latymer School, where she has stage-­‐managed productions including: Lysistrata, Oh What A Lovely War! and Murder In The Cathedral. She is applying for a technical scholarship next year.