Developed as a character study in advance of a planned chamber opera based on fairy tales, the aim for BREADCRUMBS was to produce a piece for solo voice based on a famous story, which would explore situation and personality through text, music and simple drama while avoiding directly stating details which for most audience members would be obvious. Knowing the story of Hansel and Gretel, we already know how she arrived in the dark wood, and we know what is going to happen to her after the piece ends, but what the original tale does not tell us is what Gretel might be like, how she thinks, or what her relationship with her brother is really like. Dramatically static, the progression of the piece is through Gretel’s wandering thoughts and changing states of mind as day turns to night, rather than through externalactions.

Lost and alone in the dark wood, Gretel’s thoughts wander. As she searches for her brother Hansel, childish outbursts and poetic whimsy mix with the beginnings of understanding about responsibility. Mixing references to Eastern European folk tales and Dante with more modern and informal language, we experience her exasperation with her sibling, and her fear and sorrow. Will she find Hansel and the safe haven she craves? 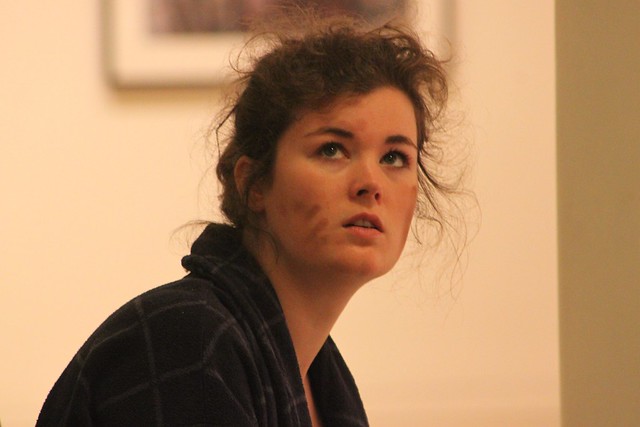 Caitlin Rowley is a Kent-­‐based Australian composer whose music often draws on the visual arts as a path to exploring sonic ideas. She has recently completed the MFA in Composition at Trinity Laban, focusing on interdisciplinary approaches to composition using art and text.

Charlotte Richardson is a graduate of King’s College London, Trinity Laban and the RAM. She has toured worldwide with Riverdance, sung in productions at the ROH and National Theatre, and this year will be on the ENO’s Mentor Scheme. Upcoming projects include Winslow Hall’s Lucia di Lammermoor and Felicitas in Nick Bicât’s Perpetua.

A fourth-­‐year oboe student at Trinity Laban, Clemmie Curd studies under Jo Lively and Chris O’Neal. In 2011, she was awarded a Trinity College Laureate scholarship and, in her second year of study, received the Highly Commended award in the Evelyn Rothwell Oboe Competition.

April in the Amazon