The Improvised History of the World

The Improvised History of the World

Moving Point Productions is a new music theatre company– established by Pawel Klica and Jazz Flaherty – producing interactive music performances across Europe. Working collaboratively with the most exciting emerging performers and established British artists, the company aims to create work that is interactive and playful. Moving Point Productions has previously devised and workshopped performances in Denmark, Sweden, Spain and the Netherlands.

THE IMPROVISED HISTORY OF THE WORLD is an interactive, immersive musical where audience members are given a chance to shape a new version of their own history – think of it as of a “choose your own adventure” show. Taking ancient history as a starting point, audiences will be given a chance to make decisions that will impact the entire performance – progressing through medieval times all the way to the modern history and near future. Experience the power of early empires, feel the weight of the crown in medieval times, choose your side during the cold war or feel the blood rush ofa space race. The choice is yours. Written by four established British poets with music composed by the most promising European artists, this show presents its audiences with over twenty-­‐five scenarios and almost unlimited variations of the story – utilising tools such as improvised music and live performance poetry. 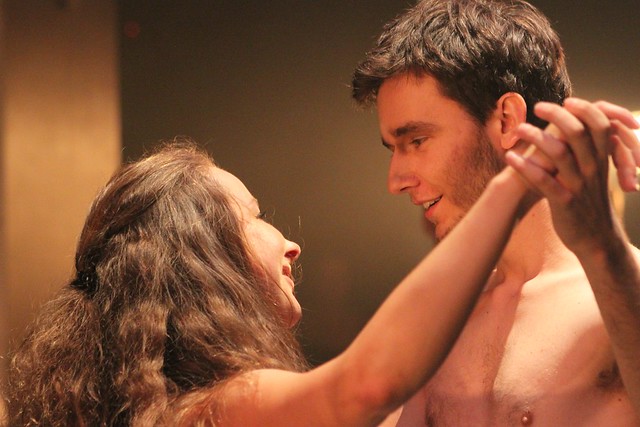 Hannie McBride is a multi-­‐disciplinary artist – working as a director, writer and actor in theatre and film – graduating from the Drama Centre and the National Institute of Dramatic Art, Australia.

Milda Samsonaite received her training in Vilnius, Lithuania, and is currently entering the third year of her Design for Stage degree at the Royal Central School of Speech & Drama.

Pawel Klica is a theatre producer and graduate of the Royal Central School of Speech & Drama. He has collaborated with the National Theatre of Iceland, Backa Teater and the Accidental Festival 2013.

Kasha Bajor is a Polish actress based in London since 2004. Studied drama at Lart Studio in Krakow, Poland, she is also a trained musician and movie actress.

Iris Baratier trained at the Lucernaire and Frederic Jacquot Drama School, graduating in 2011. She has recently performed in the Barons Court Theatre and the Trinity Buoy Wharf.

Melanie Barcelo is a vibrant London based performer; since graduating from Brunel University in 2012, she has starred in a number of films and theatre productions.

Lewis Buxton is a London-­‐based writer working in poetry, playwriting and reviews, graduating from University of East Anglia in 2014 and running live literature events in both Norwich and London.

Raquel Moreno is an actress currently leading interactive performances of the Freshwater Theatre Company, bringing drama to schools all around London.

Emily Prudence, originally from the US, has been involved in theatre since the age of 5 and recently graduated from RADA’s MA Theatre Lab – a course focused on devising physical performance.

Tracey-­‐Lee Sharples, originally from Australia, moved to London in 2011. She finished her education at the National Institute of Dramatic Arts in Sydney.

Bartosz Stanislawek is originally from Poland, currently entering the third year of the BA Acting course at the Royal Central School of Speech & Drama.

Harriet Burns has recently completed her final year at the Royal Academy of Music. She has performed lead roles including Diana (Cavalli), Barbarina (Mozart) and Gretel (Humperdinck).

Jon Tarcy is entering his final year on the BA Acting (Musical Theatre) pathway at the Royal Central School of Speech & Drama. He has previously worked with the National Youth Music Theatre.

Theo Cranmore graduated from the Royal Welsh College of Music & Drama and attained a DipABRSM in flute performance in 2013, performing as a principal flutist since.

Kuba Wiecek is a Polish alto saxophonist and composer, currently studying at the Rhytmic Music Conservatorium in Copenhagen and performing in Europe and the United States.

Albert Karch is a Polish drummer and composer, and former student of Prof. Czeslaw Bartkowski in the Jazz department of prestigious F. Chopin Music Conservatory in Warsaw.

Jacek Cichocki is completing his Masters degree in jazz piano at the Feliks Nowowiejski Academy of Music in Bydgoszcz (Poland), touring and giving concerts around the country.

Herbert Boersma is a violinist currently studying on the prestigious advanced post graduate program at The Royal Academy of Music, Århus, Denmark.

Anne Korff de Gidts has a degree in cello performance at the Conservatoire of Amsterdam. She is currently touring internationally around Europe.