Chance was devised as an experiment into the role of the observer within contemporary classical music. The work was first devised by Tom Weil in 2007 who worked with Omar Shahryar to contrive a form of naturalistic drama, vocal style and libretto to depict an experience of realistic third person viewing through a sense of complete immersion for the audience.

Chance is a journey. We follow the experience of a man through what is an ultimately bleak exploration into coping with loss. The characters remain nameless and the details of their personal situations hidden, allowing the observer to assume, create or relate to them by inserting their own experiences and memories where appropriate. DVDs of the 2007 performance will be available after the performance. 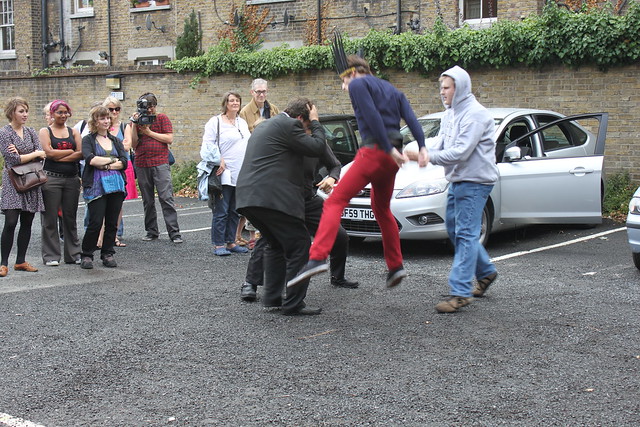 Tom Weil graduated from The University of York in 2007 where he first devised and performed Chance. Having composed for groups from symphony orchestras to percussion ensembles, Chance was an opportunity to focus on creating music out of the concert hall. A percussionist and jazz pianist, Tom likes to draw from a variety of musical genres in his composition, from Jazz, Drum n Bass and RnB to contemporary classical styles. In 2007 Tom also co-founded Syllabus, a music strategy agency, which is still running successfully and he now has a number of entrepreneurial start-ups in the areas of web and media. www.tomweil.co.uk

Simon Frost studied music at The University of York and plays the saxophone, clarinet and is a singer. He played the lead role in the world premier of Chance in 2007. He has played with the New Phoenix Orchestra and is currently a music teacher at Denbigh School in Milton Keynes.

Omar Shahryar also graduated from The University of York where he and Tom met and worked on the libretto of Chance. As a creator of music theatre, he has also collaborated with dancers from the Northern School of Contemporary Dance and the composer Felipe Otondo on the devised piece To have done with the judgement of Artaud at the Edinburgh Fringe Festival. He freelances as a director and producer of opera, working as an assistant at Royal Opera, Grange Park Opera, Opera North, Grimeborne Opera Festival and Mahogany Opera. His professional directorial debut was with Amahl and the Night Visitors for St Albans Chamber Opera in January 2009

Anna, Nell, Marius and all at Tête á Tête for the opportunity.

Dave Shacks for his undying negativity

Hammersmith Council for not making this too difficult

Bill Banks-Jones for making this possible

Nadia for making it necessary

Colin Weil for everything.