juice presents experimental a cappella songs, including the odd surprising cover! They share the set with the beautiful electronic Welsh-Iranian folk pop of Roshi feat. Pars Radio, including some collaborative numbers.

‘The 21st century’s answer to the Swingles or the King’s Singers’ (The Times), Juice are at the forefront of the UK’s experimental/classical scene, performing new vocal music which draws on classical, world music, jazz, folk, pop, improvisation and theatre. They have featured on BBC Radio 4’s Woman’s Hour, BBC Radio 3 and Classic FM. They have performed at London’s Wigmore Hall and the South Bank, King’s Place and the Roundhouse. In 2011, they made their US debut with concerts in New York and at the famed SXSW Festival in Austin, Texas. In 2007, they were the first UK prize winners in the history of the internationally renowned Tampere Vocal Festival.

juice‘s debut album Songspin (Nonclassical, 2011) won an international Independent Music Award for Best Contemporary Classical Album in 2012. Featuring remixes by the likes of Camille producer MaJiker and Bjork collaborator Mikhail Karikis, it was reviewed by The Observer as ‘Eighteen immaculately achieved tracks, spanning Elisabeth Lutyens to Gabriel Prokofiev via folk song and avant garde, enchant and enthrall‘ (The Observer). Of their second album, Laid Bare: Love Songs, BBC Music Magazine said, ‘these three are feisty, and will take on anything the variety and virtuosity are astonishing, and rewarding’. Their third album, a collaboration with David Thomas Broughton entitled Sliding the Same Way was released September 2014.

juice have had their music choreographed to by Maurice Causey from the Nederlands Dans Theatre; have devised their own live vocal score to the 1916 film The Danger Girl (BFI Southbank, Latitude Festival, King’s Place with the Bird’s Eye View Film Festival); have performed live for a London College of Fashion Graduate Show; and have worked with internationally-renowned beatboxers Shlomo and Beardyman.

juice’s winter album, Snow Queens, which features arrangements of traditional songs and brand new commissions, will be released in December 2017 on Resonus. 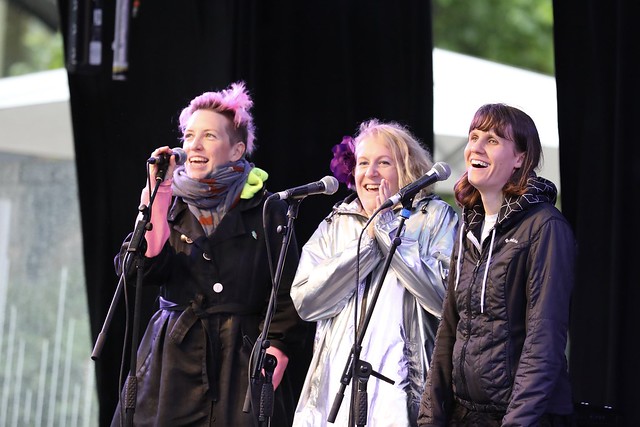 Roshi’s songs reflect her origins, influences and experiences in a personal highly individual way accompanied by unusual piano or keyboard arrangements, vocal loops and effects – they are reflective, melodic and quirky – her voice airy and tender but possessed of an inner power. When she interprets Iranian song it is in a personal style bringing a contemporary twist combined with an authentic understanding of context and language.

As Roshi featuring Pars Radio, Roshi and Graham have released several records that have received significant airplay (Radio 3, 6 Music, RTE) and considerable critical acclaim including The Quietus, The Wire, The Independent, New Internationalist, Songlines, Rock n Reel, Q, DJ Magazine, PRS M Magazine and twice record of the month in Mixmag who described her as “one of the most singular voices working at the moment”.

A visiting tutor at Goldsmiths, Roshi has also led high profile participatory projects and training for many organisations like the BBC Symphony Orchestra, Rhythmix and Kith and Kids. She is an associate artist for Sound Connections and a member of their expert Music For Young People in Challenging Circumstances network panel. She is also a featured artist in Dr. Pamela Burnard’s book Musical Creativities In Practice.

Roshi has received several commissions including the Belonging exhibition at the Museum Of London, BBC Radio 3’s The Verb, So & So Circus Theatre, Birds Eye View, the Southbank 2012 WOW festival and the British Council for whom she presented major public sound art pieces in Kuwait in May 2014.

Cubitt Sessions: Impropera – The Next Frontier