The work is essentially a kind of song cycle divided into six scenes based on a fictional time in the life of Marie Sklodowska-Curie and her daughters Irene and Eve.

In 1911 Marie Curie received her second Nobel Prize – the first person ever to have done so. She was already the first woman to receive the award and her fame was now international. Despite this she failed to persuade the Academy of Science to abandon its prejudice against women; but a scandal to rival the notorious Dreyfus affair was to follow…

We are in L’Arcouest in Brittany – the Curie’s rural retreat – in about 1927; Marie and her daughters Irne and Eve remember 1911… and sometimes assume the roles of other characters from that time, notably Mmes Langevin and Bourgois, who – along with the right-wing press – were instrumental in Marie’s persecution.

The text is based on Marie’s writing and letters and also on contemporary accounts of the development of Marie’s work. It uses sources from the writings of all the women and people associated with them, and conjures up Marie’s excitement at her and Pierre Curie’s scientific discoveries as well as revealing the intimate, personal side of her character. There are quotes from traditional Polish children’s music – a strong reminder of Marie’s roots and heritage. We discover that Marie never got over the sudden and tragic death of Pierre, her husband and closest colleague.

The work explores the connections between the woman – both as close relations and in the case of Marie and Irne as scientists. It is Eve who is the odd one out. She is an artist, a musician and we see the differences.

L’Arcouest in Brittany about 1927, but remembering 1911. It is summer, but raining and Marie Curie, and her daughters Irene and Eve, are indoors…

Scene 1: Marie sings a little Polish children’s song to herself as she stares out at the rain and the others join in. Marie remembers meeting Pierre Curie for the first time.

Scene 2: Marie describes her and Pierre’s excitement at the scientific discoveries.

Scene 3: Eve vents a certain frustration at being the only non-scientist in the family, but understand her mother’s greatness.

Scene 4: Irene is methodical, practical and hard working and offers her sister advice before returning to her scientific writing.

Scene 5: After Pierre’s death, Marie Curie had a brief affair with fellow scientist, Paul Langevin. Mme Langevin (Paul’s estranged wife) and her sister Mme Bourgois spit out the vitriol of the reactionary press and establishment.

Scene 6: Marie remembers Pierre’s death and how they had cared for their children. 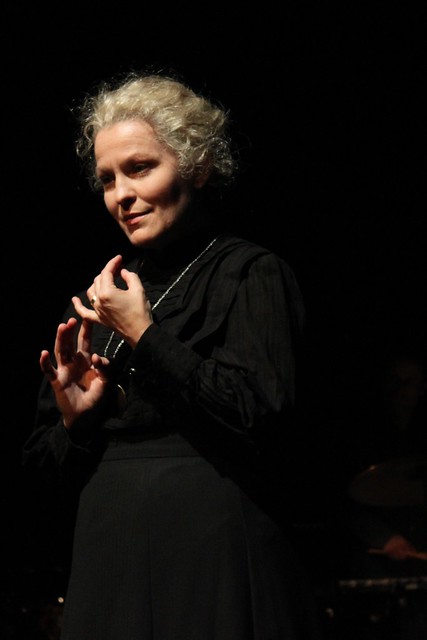