STATE OF BEING started life as a heavily deconstructed interpretation of a novel – one that replaced the importance of narrative meaning with that of thematic meaning. After a period of time, it became clear to me that the original source material (the text that comprised the novel itself) was irrelevant; all I was left with was the importance of thematic meaning as a theme. I thus put out a crowdsourcing call for a brand new libretto. Crowdsourcing involves soliciting contributions from a vast number of people around the world – in STATE OF BEING’s case: Columbia, Indonesia, England, France and New Zealand. The idea behind implementing this particular practice was to develop a global interpretation of my original brief – collating interpretations that varied from one culture to another into a potent tapestry. Contributors submited, under strict guidelines, material that was further edited by myself. From this I created eight scenes.These scenes deal with subjects such as love, sex and death.

STATE OF BEING presents a powerful series of emotional states of being that depict an individual’s struggle for survival and redemption. Just as Native American Indians used to ingest peyote to communicate with God and discover the truth behind their existence, we too can converse with God in a variety of ways… Think of the initial feeling of falling in love, whirling dervishes in dance, the clarity gained from finding that perfect mathematical theorem, being carried away whilst listening to jazz, the burning, primitive desire to have sex, the abrupt finality of death, and the escapism achieved through taking drugs.

This is an opera about how we, in our modern world, can achieve certain forms of transcendence. 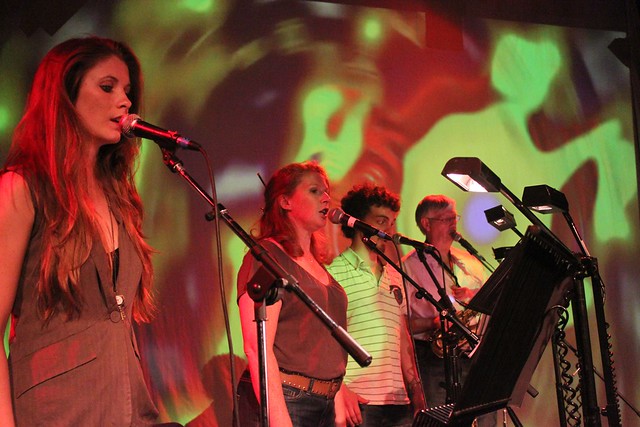 In the late 1980s, having barely begun what is now a 20-­‐year career, Composer Warwick Blair was already being described as “one of New Zealand’s most original musical thinkers” (NZ Herald), and the “enfant terrible of New Zealand Music” (NZ Listener).

Michael Smedley is currently Director of Music at the City of London School, but his main musical interest continues to be his directorship of the Oxford Pro Musica Singers, which he founded in 1977.

Nia Coleman holds an Honours degree in Music and Drama from The University of Manchester. She was awarded the prestigious Procter-­‐Gregg Prize for Performance from the School of Arts, Histories and Cultures, in July 2010.

As a graduate of the Royal Northern College of Music, Sara-­‐Louise Parry’s recent successes include The Great American Songbook at Hampstead’s New End Theatre.

Nicholas Charles has played in an immense number of ensembles ranging from 1920s -­‐ 30s bands through to modern jazz bands. His theatre experience includes The Black and White Minstrel Show, Wind in the Willows, Aladdin, A Chorus Line, Ratpack and The Best of Broadway.

Andrew Spiceley studied at the University of Surrey, gaining a Masters degree in performance (percussion) and composition. He has performed at London’s South Bank, the Wigmore Hall, and broadcast on BBC Radio 3 with ensembles including Quorum and Lontano.

This production gratefully acknowledges the support of the New Zealand Society.