Inspired by the life of Hildegard of Bingen and using a text fashioned from three different pieces of her writing interspersed with the canonical hours, Guilt is a provocative piece of music theatre which examines female sexuality, jealousy and the burden which spiritual ‘truth’ brings with it.

Using a combination of Hildegard of Bingen’s own texts – her vision, The Cosmic Egg, an antiphon from Symphonia, and the only remaining fragment from her Unknown Language – interspersed with three of the Canonical Hours – Vespers, Compline and Matins – I have created a fictitious narrative based on the relationship between Hildegard and her ward, Jutta of Spanheim.

Given as an oblate to Jutta at the age of 8, Hildegard started having her visionsat a very early age, yet only “went public” with them after Jutta’s death, in 1136. The years between 1113 and 1136 – from entering Disibodenberg abbey with Jutta, to the latter’s death – are somewhat of a mystery.

GUILT is my own interpretation of the little known relationship between these two complex women.

We see Hildegard chastised by Jutta, havingconfided her latest vision to her.

Hildegard and Jutta pray together at Hildegard’s bedside.

Jutta self-­‐flagellates, angry at her herself for her earlier reaction.

Hildegard awakes, startled by a vision slowly fermenting itself, and proceeds to give “voice” to it. 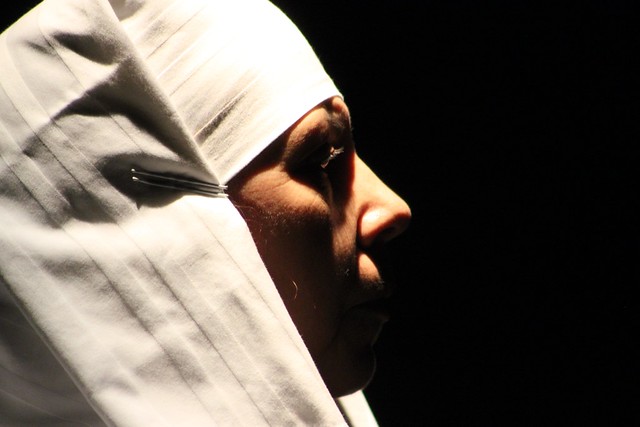 After studies at both the Royal College and Royal Academy of Music, the latter supported by an AHRC award, Paul Everndan completed his PHD at King’s College London. Paul’s music features on both the Big Shed Music and Lorelt labels. Guilt is his second theatrical work.

Richard Jones studied at the Royal College of Music and York University. He is a founding member of the Ligeti Quartet, one of the UK’s leading contemporary music ensembles. They were selected as Park Lane Group Young Artists 2013, and as a European Chamber Music Academy Associate Quartet for 2013-­‐14.

Born in Poznan (Poland), Jakub Korytowski is a sound and video artist focusing on live performance. His works consist of an experimental collage of live action footage and recordings, resembling abstract painting with light and sound. He currently lives in London and studies at Central Saint Martins.

Sibylla Meinenberg trained at East 15 Acting School. Theatre/Opera credits include: Elektra, The Cumnor Affair and In her little room (Riverside Studios), Judith, A Parting From The Body and Caligula (Hologram Rose), and The Man With Two Horns (French Institute). Recent films include: Talion-­‐Face to Face, and Fata Morgana.

Born in Armenia, Angela Najaryan studied at the Komitas State Conservatory and the Royal Academy of Music (London). Described by the Daily Telegraph as a “virtuoso violinist” for her performance at Tête à Tête: The Opera Festival 2011, Angela has performed with Clio Gould, Yan Pascal Tortelier and Sir Colin Davis.

Natalia Sookias is an independent filmmaker who grew up somewhere between London and California. She is a graduate of the California Institute of the Arts, where she studied filmmaking. Currently, she lives in Armenia.

Mme Butterfly: The One Man Opera