THE FISHERMAN’S BRIDES grew out of Lucie’s fascination with her Highland culture. Life in the Highlands is controlled by the weather; this opera tries to reflect the relationship between the landscape andits people and how they are shaped by the weather, like stones on a beach. THE FISHERMAN’S BRIDES – comprising mainly female cast members – tries to highlight the issues faced by women in these communities: left on shore, married to men who are also married to the sea. Women used to carry men to their boats to prevent their clothes from getting wet before they sailed, and would wait days for their return. Considerable pressure was placed upon these women; throughout the opera, female characters of different ages are used to symbolically reflect the cycle of oppression that continues through generations.

The music is inspired by Scottish music, weaving together classical and folk. Lucie has scavenged the set from the shoreline, trying to immerse the audience in an all-­‐encompassing nautical experience. She has recorded the soundscapes of her local environment, which will be interwoven into the orchestral texture during the concert.

THE FISHERMAN’S BRIDES is an opera that brings to life the eccentric characters of a Highland fishing village. Each song depicts a different story. It begins with Eilidh – a dreamy girl – picking stones from the shore, each stone the heart of a boy. We then meet John the fisherman, preparing to set sail, Mairi, the old woman who waits for her dead husband to return from sea and the village ladies, who gossip behind their twitching curtains. Meanwhile, the local farmer’s sheep are going missing and a mystery unfolds…

Mythological and symbolic, THE FISHERMAN’S BRIDES explores the ultimate sacrifice of one woman to bring her husband home. A dark, yet humorous production, with songs created from tide tables and sounds from the shore, this opera will transport you from the ocean floor to the depths of an old woman’s dusty heart. 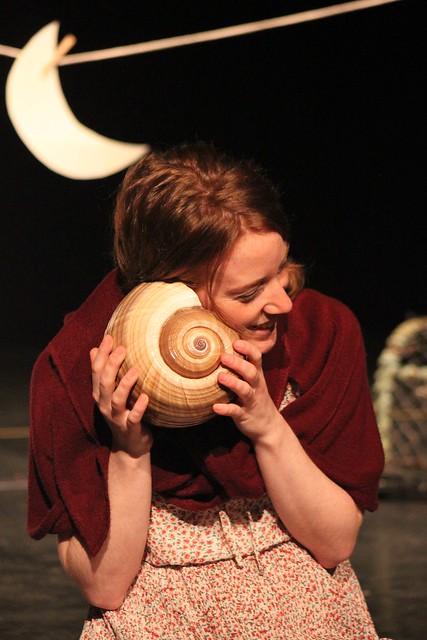 Lucie Treacher is a nineteen-­‐year old composer and singer-­‐songwriter. At 14, she joined the Purcell School of Music (London), and performed in venues such as Southbank Centre, Wigmore Hall and St Martin-­‐in-­‐the-­‐Fields. This year, Lucie received a JCI Ten Outstanding Young People in the UK award for her outreach and musical work

– teaching in the Amazon and running a project for Women in Sri Lanka.

Linda Hirst was born and grew up in Huddersfield, and studied flute and singing at the GuildhallSchool of Music & Drama (GSMD). She is internationally renowned, in particular for her performances of contemporary music

with many of the world’s leading orchestras, conductors and chamber ensembles. Linda is Head of the Vocal Faculty at Trinity Laban Conservatoire of Music & Dance.

Inês Simões is a Portuguese soprano, trained at the GSMD and at the Wales International Academy of Voice. Inês Simões is a keen recitalist, and has a devout passion for modern music, having sung in important London venues and toured extensively in Portugal.

Soprano Caroline Kennedy was awarded a BA Hons in French and Drama from The University of Kent and, in July 2011, graduated from The Royal Conservatoire of Scotland’s (RCS) Alexander Gibson Opera School. She has sung with opera companies including: Grange Park Opera, Opera Holland Park, Scottish Opera and Opera Upclose.

After graduating from the University of Sussex with a degree in Music & Media, Soprano Emily Phillips studied Voice on the Postgraduate Diploma course at the Royal Welsh College of Music & Drama in Cardiff. Emily lives and works in London doing opera, oratorio and education work, studying with Gary Coward.

Sophie Kochanowska recently graduated from GSMD, under Susan Waters. She is an alumna of the Royal Scottish Academy of Music & Drama’s (RSAMD) Junior Academy and the Scottish Opera Connect programme. Recent highlights include: Servilia La Clemenza di Tito, Helena A Midsummer Night’s Dream and Sophie Werther in Opera Scenes, and a premiere of a new vocal work by Joel Rust at the Wigmore Hall.

Zoe Perman is a soprano and successful freelance performing Arts teacher, working from home and for Stagecoach Performing Arts School. She has also worked for Monkey Music and MADE Theatre school. Zoe studied Music at Bath University and went on to do an MA in Vocal Performance at RCS.

Amy Worsfold is a soprano from Surrey who studied music at York University. Since leaving university, Amy has been appearing in London – and around the home counties – in opera and concert for ensembles such as: Surrey Opera, Fulham Festival Orchestra and The Barn Theatre (Welwyn).

Rosalind O’Dowd studied French and English at Liverpool University, after which she went on to do an MA in Voice at Trinity Laban. She has sung with many opera companies including: Isleworth Baroque, Co Opera Co, Mayhem Opera and West London Opera. She also teaches.

Baritone Hamish Mackay studied at GSMD. He is currently under the tutelage of Robert Dean. He performed Judas in Jonathan Millar’s production of St Matthew Passion (National Theatre, 2011), and the Messiah with Simon Over (2013). He was Crony/cover Ben Paul Bunyan (British Youth Opera), and will also be singing Genno Spirit Harbour (Cambridge Chamber Opera) at this year’s Festival.