Following a sell-out exploration at the 2009 Festival, Gutter Press returns to the front lines of the oversexed, overexposed and underfed frenzy of starlets and paparazzo that is: the Fame Game. Satire and true romance sit side-by-side in this fusion of opera and musical theatre from writer James Richards and composer Fergal O’Mahony. 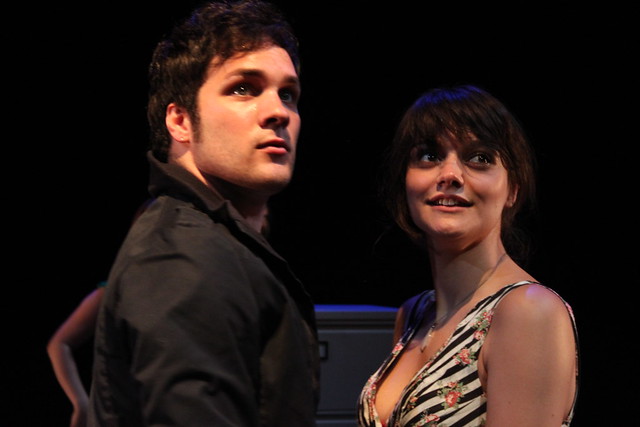 Fergal O’Mahony – Composer/ MD – has a playing career that has taken him throughout Europe, the US and as far as Kazakhstan. He has appeared as concerto soloist with several orchestras including the Royal Liverpool Philharmonic Orchestra and Manc hester Camerata. He has also toured with European Youth Orchestra under Vladimir Ashkenasy. Fergal’s work as a sought -after freelance MD includes Tête à Tête’s production of Salad Days at Bristol Old Vic.

James Richards – Writer/ AD – is a librettist, director, poet, and freelance writer working in London. He is a founder member of London Poetry Systems, a London-based poetry and mixed-media collective. Gutter Press is James’ first collaboration with pianist-composer Fergal O’Mahony. He has studied at Oxford University and London Met, and his theatre criticism appears in WhatsOnStage.com, South London Press, The American and Islington Gazette.

Laura Wickham, Daisy – is a recent graduate from Central School of Speech and Drama. Her theatre credits include: Dolores – Eddie King’s Unforgettable Tour of the Forgotten (Tobacco Factory), Juliet – Romeo & Juliet, Mole – The Wind in the Willows (both The Actors Church, Covent Garden), Gwendolyn – The Importance of Being Ernest (Southwest Tour) and Beth – The Basement Monologues (Bristol Old Vic).

Antony Hansen, Fred – trained at Mountview Academy of Theatre Arts. His most recent theatre credits include Feuilly and understudied and played Marius in Les Miserables (Queens Theatre) Joseph and Pharaoh in Joseph and the Amazing Technicolor Dreamcoat (UK Tour) and An Audience with Antony Hansen (The New Theatre, Oxford). His recent concerts include Dream On (London Palladium) and Banardo’s Centenary Concert (Royal Albert Hall).

Callum McIntosh, Harry –studied Musical Theatre at the Royal Academy of Music in London. His theatre and concert work includes Goodbye Barcelona (Arcola Theatre) and Monkey – Journey to the West (02 London). O2 Christmas Spectacular (O2 Arena) White Christmas (Royal Albert Hall); Grease the Musical in Concert (West End International). He has featured on the soundtracks of Angels & Demons and Clash of the Titans.

Kirsty Malpass, Brandy – trained at Mountview. She is currently playing ‘Maria’ in The Sound of Music national tour (RUG). Other theatre include ‘Rosie Cotton’ in The Lord of the Rings at the Theatre Royal Drury Lane, directed by Matthew Warchus, ‘TJ’ in Jerry Springer the Opera at the Cambridge Theatre, London, in which she also appeared in the live production for the BBC.

Paul Sheehan, Tony – graduated from Exeter University, sung in Exeter Cathedral Choir, trained at the Guildhall School of Music and Drama and now studies with Robert Dean. Principal operatic roles include ‘Ceprano’ in Rigoletto for Grange Park Opera, ‘‘Peter’ in Bach’s St Matthew Passion for Glyndebourne and ‘Don Alfonso’ in Così fan Tutte for Glyndebourne on Tour, as well as ‘Papageno’ and ‘Schaunard’ in La Bohèm).

Faye Plumley, Chelsea – trained at Middlesex University gaining a degree in Drama and Creative Writing. Her credits include: Chorus Starlett in the 2009 production of Gutter Press the Opera, Solo Performer in Destination Unknown and Gotta Sing!, Dick Whittington in Dick Whittington and Character and Parade work at DisneyLand Paris. Faye is thrilled to be returning to the ‘gutter’ again this year!

Sophia Swannell, Kiwi – is a graduate of The Arts Educational School (Tring Park) and The American Music and Dramatic Academy (New York). Her most recent credits include a production of Ebenezer performing the role of Belle with Surflight Theatre in New York and FAME (american tour), dancing in the ensemble and covering (and performed) the role of Iris, with Jersey Shore Entertainment.

Jennifer Kristian, Crystal – trained at the Birmingham School of Acting and The Royal Academy of Music. She has played Autolycus in A Winter’s Tale (Shakespeare’s Globe) and Sonia in Born of Glass, and appeared in musical theatre concerts at The National Theatre, The Royal Festival Hall. Jennifer has also recently performed at The Royal Albert Hall, in The Sondheim Prom 2010 (BBC).