Innocence in the Asylum

Innocence in the Asylum brings you a double bill of chamber opera with premieres of works by two exciting female composers, Diana Soh’s (Singapore) The Boy Who Lived Down The Lane and Blair Foley’s (USA) We’re All Mad Here. Performed by some of the most talented young musicians and vocalists in the UK, Innocence in the Asylum is brave, innovative and pushes every existing chamber opera boundary to the limit and beyond.

Size Zero Opera, founded in 2007 by Laura Bowler, perform innovative, challenging and all new work! We bring our musicians to the forefront as they are integral to the theatre we want to create and explore. One of the company’s greatest successes has been the several performances we have given of Laura Bowler’s Settings of Tanya Gold which was the feature of an article written by Tanya Gold in the Guardian about the music setting of her articles. Originally commissioned by London Sinfonietta and ROH2, the Tanya Gold settings grew into a song cycle of a somewhat satirical nature. Musicians from Size Zero Opera performed these works at the Linbury in 2010 with Vocalists from the ROH Jette Parker Young Artist’s Scheme conducted by Laura Bowler.

Read The Boy Who Lived Down The Lane review in 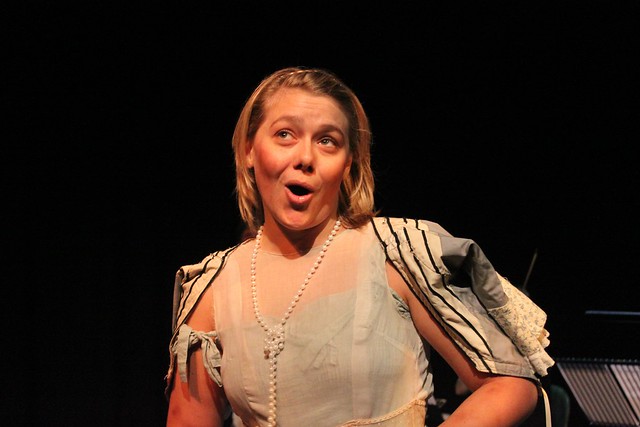 The Boy Who Lived Down The Lane

A Study of Insanity in Literature

with James Currie is an English philosopher, musicologist, poet and writer who is as an Associate Professor in the Department of Music. His courses cover a variety of historical epochs and genres and are dialectically articulated at the intersections between philosophy, music history, cultural critique and creative writing. Through their common interest in reading Lacan’s seminars, they met for intense discussions and subsequently Diana approached James to be her librettist and to collaborate on her idea of an opera. Currently, James is on sabbatical from his academic duties but continues to occupy himself actively as a poet and writer in London. He has recently completed his new book “Music and the Politics of Negation”. It is published by Indiana University Press and will be released in early 2012. Diana is currently on the Music Faculty of The School of the Arts, Singapore and looks forward to her upcoming residency at IRCAM in September 2011 and the Gaudeamus Music week 2011 where she has been nominated for an award. For more information on their respective works www.dianasoh.com, www.music.buffalo.edu/faculty/currie/index.shtml

Blair is a U.S.-based composer, specializes in notation of time in modern art. She completed her B.A. and M.A. at Stanford University in music and literature, working primarily with mentor Dr. Brian Ferneyhough. She was an Undergraduate Fellow at the Stanford Center for Research in the Humanities studying “Notation of Non-Linear Time in Western Music since 1900”. Her work has been honoured both internationally, at festivals and concerts in Russia, China, Germany, Finland, France, and throughout the U.S. Recently, she has been a composer-in-residence at the Royaumont Foundation in France.

Laura is a young composer and mezzo-soprano living and working in London. Her work is influenced by many composers and artists ranging from Stephen Sondheim to Harrison Birtwistle, the paintings of Kandinsky to the theatre of Antonin Artaud. She has recently been selected for the LPO Young Composers Scheme and is currently working on commissions for the BBC Symphony Orchestra as part of their new Embedded scheme, a string quintet for the Kreutzer Quartet with double bassist Rachel Meerloo, a collaboration with the award-winning playwright Lavinia Murray; a long term project aiming towards a full-length chamber opera based on E. T. A. Hoffman’s ‘The Sandman’ and Trumpet Concerto for the Linea Ensemble in Strasbourg. She has been commissioned by The Opera Group, ROH2, Tête à Tête Opera, Grimeborn Opera, London Sinfonietta, Esbjerg Ensemble, Neue Vocalisten Soloists, The Kreutzer Quartet among others and has received performances throughout Europe and in the USA. She is currently undertaking her PhD in Composition funded by the AHRC at the Royal Academy of Music.

The North Wind Was A Woman & Dhyana