Richard Thomas (Writer/Composer of Jerry Springer The Opera) fresh from his Royal Opera House smash, Anna Nicole and West End dance spectacular, Shoes presents WRONG SONGS FOR SUMMER. These are songs and gags from the bottomless pit of his SOUTH LONDON SONGBOOK. Listen to the world première of some new, wrong songs and some very old, very wrong songs for some stellar voices (Loré Lixenberg, Tim Howar) from this globally-acclaimed comedy maestro. Thomas’s works have been performed all over the world from Carnegie Hall to Sydney Opera House via The National Theatre, Sadler’s Wells, Royal Opera House and the West End. He will be lowering the bar at the festival for two nights only 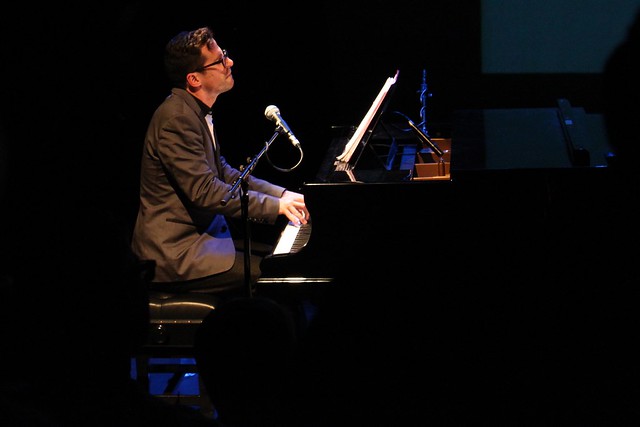 Evan has directed Avenue Q (UK and US tours), RENT (US tours, Montreal and Far East), Out of the Reach of Children (NYC and LA), Simone at Town Hall, and Womyn in Three (NYC). Associate Director: Shrek – the Musical (Broadway and US Tour) Avenue Q (Broadway, U.S. tour and London), RENT (Broadway), Les Misérables (US tour) among others.

Music theatre performances include the lead role in Bent Sørensen’s opera Under Himlen at the Royal Opera House in Copenhagen as well as performing in many projects with Théâtre de Complicité. Jerry Springer – The Opera at the Edinburgh Festival, the National Theatre & London’s West End as well as on the subsequently released CD as well as Anna Nicole at the Royal Opera House in London. She has performed throughout Europe at numerous festivals including Wien Modern, Oslo’s Ultima and the festivals in Salzburg, Lucerne, Edinburgh, Witten, Huddersfield, Donaueschingen and Aldeburgh. As a soloist she has performed with BBC Symphony Orchestra, Hallé Orchestra, Tokyo Philharmonic Orchestra, Danish National Symphony Orchestra, Swedish Radio Orchestra, Icelandic Symphony Orchestra, Ensemble InterContemporain, London Sinfonietta, Klangforum Wien, BCMG, Cikada, Northern Sinfonia, Ensemble Aventure and Apartment House. Television includes: BBC2 Strings, Bows and Bellows, Attention Scum, the documentary What made Mozart tick; and Kombat Opera Presents…

Here are some things wot him wrote:

After gaining a first class degree in Theatre Arts at Bretton Hall, and with very little planned for the future, Alethea stayed on for another a year to do an MA in Creative Writing. She then spent a decade holding down a variety of minimum wage jobs. During this time Richard Thomas met her in a pub. She made him laugh. They became friends. One day he dropped by and asked if she would script edit his BBC2 series, Kombat Opera, which she did. Then she script edited his libretto Anna Nicole for the Royal Opera House (2011). Then she was commissioned to write some songs for Shoes at The Sadlers Wells (2011). When that finished she wrote some songs for this evening of Wrong Songs at The Print Room. She and Richard are also planning a large choral stage work, Carmina Las Vegas. She is currently writing her first novel; The Hather House whilst also working with award winning documentary film-maker Angus Hubbard on a new project called Epiphany.

Is 18 years old and interning for Richard Thomas. She has also worked for ISO productions, PR firm communication store during LFW. She likes cycling and laughing and making cakes!