Lite Bites are unticketed just turn up and enjoy!

The creation of new work is always volatile, and we are sorry to say that due to unforeseen circumstances the show programmed for this Festival slot has fallen foul of that unpredictable environment. However, in it’s place Tête à Tête are are delighted to have the opportunity to share with you concert performances of Tête à Tête’s own Lite Bites by Tamsin Collison & Cheryl Frances-Hoad, Ergo Phizmiz and Owen Bourne.

A virtual romance. Two cyber lovers ask themselves exactly who is on the other end of the line- Can you trust your heart in the digital age?

A Speed Dating evening in Hammersmith. Georgie and Matt, both recent graduates and starting out on promising careers in the capital, should hit it off straight away. One problem – Matt is possessed by the Devil.

Caring In The Community

A charming and heart-warming tale of the unmitigated hatred that can develop between two people living next door to one another. After a long day at the office, a businessman’s evening of watching the X Factor is ruined by the dulcet tones of the opera singer who lives next door.

Where two lovers read their love letters aloud in private but may not be… just that… private. 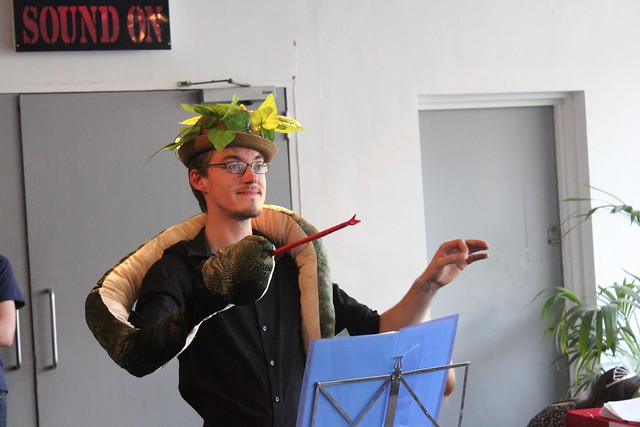 Bill Bankes Jones: Director A graduate of the ITV Regional Theatre Young Directors’ Scheme, Bill has worked for over 20 years in both theatre and opera throughout the UK and abroad, including all Tête à Tête’s productions to date. Most recently he translated & directed Hansel & Gretel for Scottish Opera, and directed Great Expectations RCM/Tête à Tête, and Seraglio, Iford.

Owen Bourne: Love Letter Music & Words Owen Bourne is among the most prolific and distinctive voice in new British music. He was hand picked to be the first ever Resident Student Composer with the National Youth Orchestra of Great Britain aged only 16 and has since produced a large body of substantial works played by major ensembles and soloists in the UK and abroad. He studied at Chethams’, Manchester University, The RNCM and the RAM.

Daniel Broad: Baritone Daniel has taken part in the past five Tête à Tête: The Opera Festival Lite Bites. Other appearances for Tête

Tête have been in Odysseus Unwound and Circus Tricks.

Corentin Chassard: Cello London-based cellist and chamber-musician, Corentin is a member of the award- winning The Mercury Quartet, the avant-garde cello and laptop duo Partial Gathering with composer Ruaidhri Mannion, The Octandre Ensemble, and he is the official cellist of the renowned Japanese violinist, Taro Hakase, in Europe.

Tamsin Collison: Love Bytes Words Librettist/lyricist Tamsin Collison has written for ENO, ROH, Southbank and The Shout. She has worked with composers including Orlando Gough, John Webb, David Knotts, Evangalia Rigaki and jazz pianist Geoff Castle, and is a member of the ‘Book, Music & Lyrics’ songwriting workshop. Love Bytes is her first collaboration with Cheryl Frances-Hoad.

Ric Elsworth: Vibes is a London based Percussionist and has played for the likes of Foals and Belle and Sebastian. Ric enjoys a varied career from playing with Orchestras to teaching children how to hit dustbins. He is delighted to be part of this season’s Tête à Tête: The Opera Festival.

Cheryl Frances-Hoad: Love Bytes Music Cheryl Frances-Hoad was born in Essex in 1980 and received her musical education at the Yehudi Menuhin School, Cambridge University and Kings College London. She is currently the DARE Cultural Fellow in the Opera Related Arts in association with Opera North and the University of Leeds.

Fabrice Serafino: Designer is thrilled to collaborate with Tête à Tête for a 3rd consecutive year at the Festival.

Visit www.fabriceserafino.com for more info about Fabrice’s past and future design works.

Joanna Songi: Soprano Joanna is on the post-graduate course at the Royal College of Music studying with Sally Burgess and is a Britten-Pears Young Artist 2012. She has performed roles at Glyndebourne Festival, Glyndebourne on Tour, Opera de Tenerife, Paddock Productions and is a frequent recitalist across the UK.

The Trial of Jean Rhys