One Small Step was conceived as a companion piece to One Dark Night which was presented at last year’s Tête à Tête: The Opera Festival. As the mother of two girls, I wanted to write a short piece that would bring to life one of those special moment’s as a parent. SN

One Small step is a promenade piece which charts the emotional journey of a couple as they witness their child’s first faltering steps. A cappella duet, intercut with a percussive score, charts the highs and lows of watching a child learn to walk. 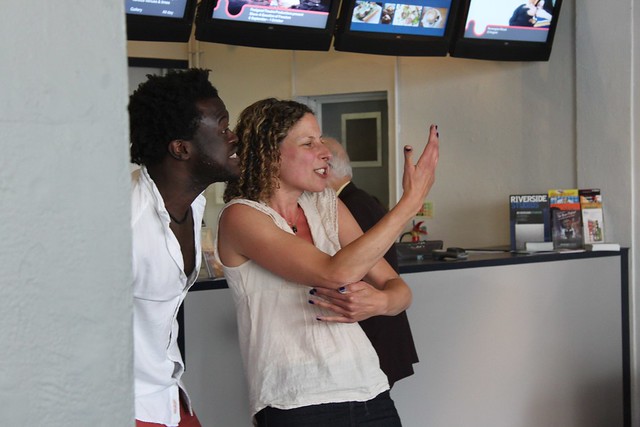 After studying law at London Guildhall University, Adebayo trained at the Central School of Speech and Drama. He is the founder of Ex Nihilo Theatre Group, with which he wrote and directed his first play In Bed, performed at The Studio, Questors Theatre, Ealing. Adebayo is currently in the original cast of Ghost the musical (Piccadilly Theatre) playing the part if the Subway Ghost.

Sabina trained with Jacques Lecoq in Paris. She is co-artistic director of Filament Theatre for whom she has directed One Small Step, One Dark Night and Drive Ride Walk. Other credits include The Deadly Curse (Opera North Education) Cold Hands, Warm Hearts (ENO Baylis) and Turtle Opera (Royal Opera House/Turtle Key). Filament’s next project is a musical adaptation of MOMO based on Michael Ende’s classic children’s book.

Osnat trained at Bristol Old Vic and Goldsmith’s College London. She is co-artistic director of Filament Theatre for whom she has written music and lyrics for One Small Step, One Dark Night and Drive Ride Walk. Other credits include music for The Very Thirsty Giraffe (Little Angel Theatre). Re:Love (Bridewell Theatre), Deadly (Theatro Technis). Osnat is starting work on MOMO for Filament Theatre and Goldilocks and The Three Bears for Little Angel Theatre. Osnat runs The Roundhouse Choir and regularly teaches on the Popular Music course at Goldsmith’s College.

Telling the Stories of Our Time