Peashoot: Adventures in the Wild West

Peashoot: Adventures in the Wild West

This opera, set in a post-­‐apocalyptic Wild West or not, takes the character, Ted Owens – the “PK Man” who claimed to contact space intelligences and control the weather – as the central, shamanic fulcrum. The “space intelligences” in this instance are white America, colonialism, and the march of technology – represented by the airships of Charles A.A. Dellschau and the Sonora Aero Club (a possibly factual, yet possibly fictitious, secret group of experimental aeronauts living and working in the 1850s).

PEASHOOT: ADVENTURES IN THE WILD WEST has no set time signature nor tempo; it moves as if representative of a dream, set in the Wild West – where night never turns to day and the stars perpetually shine.

Continuing Ergo’s radical experiments into what opera is, has been, and can be, PEASHOOT: ADVENTURES IN THE WILD WEST combines original and collaged music, live instrumentation, shadow-­‐puppetry, digital projections, handheld lights, automata and lip-­‐synching to create an atmospheric and hallucinatory world. It draws together the imagery and obscure historical references of the Wild West into a timeless pot, incorporating both aspects of twentieth-­‐century Art and the medieval chaos of Pieter Bruegel in equal measure.

In the mythological nether regions of the Wild West, where nineteenth-­‐century airships boom overhead, Ted Owens – the self-­‐proclaimed “PK Man” – summons a vast storm, in defiance of mankind.

Finding shelter from the tempest, cowboys play their favourite game: Know Your Cans. This game could, in the cramped environment of a Wild West shack, become heated – guns may fire.

Meanwhile, Ted Owens – at the end of his tether – contacts the “space intelligences” to welcome their mothership to earth. As the ship descends, the AlienQueen – an all-­‐American girl – waits for her close-­‐up, while Native Americans are torn to pieces.

A battle of sex and colonialism ensues, culminating in romance and dance. And then, of course, sleep.

Except for one horse who has it coming to him.

Amid the chaos, Ted Owens returns, bringing a shroud of darkness with him. And yet amidst darkness, there is a glimmer of hope. Or is there? Won’t anyone think of the children? 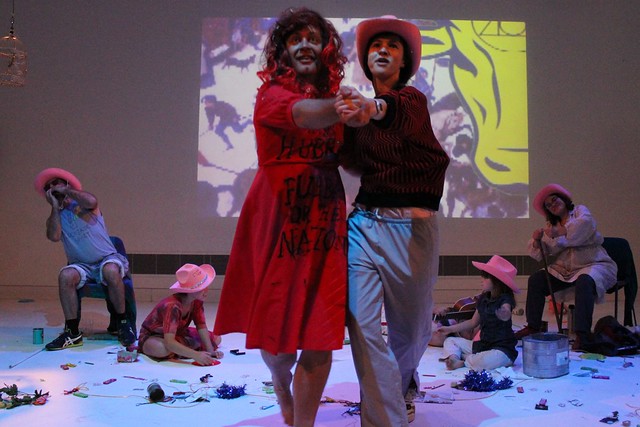 Ergo Phizmiz is a prolific producer of critically acclaimed opera, radio-­‐art, film music, installations, animation and songwriting. Past operatic work has included: The Third Policeman, The Mourning Show, Gargantua, GALA, and UOEIA – the histories of yodelling. He is currently a Sound and Music Embedded Composer-­‐in-­‐Residence with Mahogany Opera Group, and has been aTête à Tête: The Opera Festival regular for the past five years.

Flora Bertolli is an actor and superstar, recently returned to performing after a twenty-­‐year hiatus in Ergo Phizmiz’s Gargantua.

Thea Martin is an artist and performer whose work has taken her around the world: from New York to Berlin and all the way back to sunny Bridport.

Martha Moopette is a film-­‐maker and ceramicist who forays into performance and media Art.

The Travelling Mongoose is a sound-­‐recordist and musician, who has been a long term collaborator with Ergo Phizmiz since the old days of 1998.

Talulah Lotus and Autumn Poppy are nine and seven years old respectively, have spent long swathes of their lives touring operas and strange productions on trains; this is no exception. Talulah has read more books than most adults, and Autumn can draw like Picasso.