A new electronic opera set in the Wild West- stuffed with trigger-happy cowgirls, gyrating dinosaurs, and saloon brawls. An ambitious young woman navigates the chauvinistic world of pre-history, belting out neolithic arias in the process.

I got the idea for this piece when I was trying to impress a girl in a bar. I told her I wrote operas and she asked if I would write one about her. I said I already had, and made up some nonsense about the Wild West, GG Allin and dinosaurs. I wrote it out the next day and shelved it. I found the script a few years later when I moved house. It was rubbish, so I started from scratch but kept the general idea intact.

I’ve been drawing pterodactyls on scraps of paper for about twenty years- in every conceivable scenario: diving into swimming pools, riding exercise bikes, chugging booze, fighting ninjas. I have also been making electronic music for a long time, mainly for fun. These two habits have been very much on the back-burner, though. The more serious endeavour is writing music for classical people to play and sing. This opera is the first time I have combined all three hot pursuits.

This opera is dedicated to Felipe Arturo Eucarpio Sierra.

“The future of new opera” – The Independent

Pterodactyls of Ptexas from Tête à Tête on Vimeo. 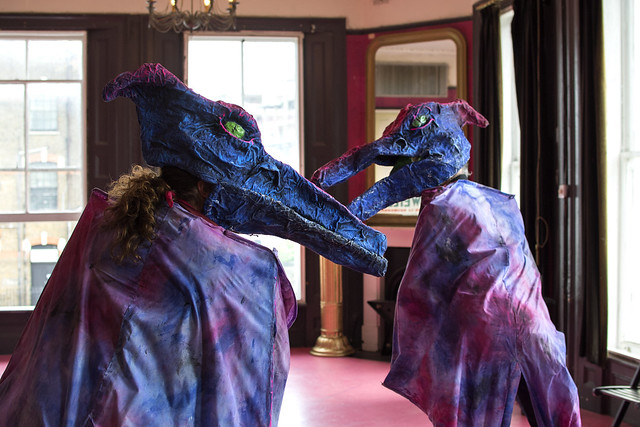 Stephen Crowe is an English composer of little operas and experimental music. He was born in Bolton and grew up in Nottingham. He studied Fine Art at John Moores University, Liverpool, and Composition at Goldsmiths College. He got his sexual education from listening to Prince albums. He sings in a heavy metal Barbra Streisand covers band.

Joseph Houston is based in London and Berlin. He is well into contemporary and experimental music. He has performed all over Europe and in China. His playing has been broadcast on BBC Radio 3, BBC Radio 4, and Albanian national television. He has worked with a wide range of composers, including Christian Wolff, Simon Holt, Brian Ferneyhough and Charlotte Bray. He has a CD of new works coming out soon on Naxos.

Nicholas Morton studied at the Royal College of Music International Opera School with Tim Evans-Jones. He previously studied at Durham University, before arriving in London where he completed his postgraduate studies at the RCM with distinction. Recent roles include Malatesta (Don Pasquale) for Euphonia Opera, Sid (Albert Herring), Peter (Hänsel und Gretel) and Doctor Falke (Die Fledermaus) for RCMIOS and the title role Don Giovanni (Don Giovanni) for Rye Festival.

Alistair Ollerenshaw graduated from the Royal Academy of Music Opera Course. His recent performances have included Bartolo (Il barbiere di Siviglia) for the Rossini Festival at Cadogan Hall, Schaunard (La Bohème), Merry Opera and he has just covered the role of Sid in Britten’s Albert Herring for The Grange Festival.

Flora McIntosh was born in London and trained at the RNCM. Recent work includes creating the role of The Goddess of the Sea in a new opera for children, Ulla’s Odyssey, Carmen for OUC, Romeo in I Capuleti e I Montecchi and her Wagnerian debut covering Brangane in Tristan und Isolde for Longborough Festival Opera 2017.

Drummond Bowskill graduated from Mountview Academy in 2001, since then he’s mostly been selling his soul to advertising demons, but when he’s not whoring for cash he can be found at the Cambridge Shakespeare Festival, or on the Immersive Theatre circuit making faces and creating noises. This is his first opera.

Jonathan Storey is one half of theatre company Goody and Storey, whose work includes Jack Pratchard (winner of 2012 Arlyn Award), STAR, and My Mother is a Fish. They are currently working on two new shows Ich Schreiend and Play On Your Own which opens in Berlin in November 2017.

Saskia Harmenszoon van Rijn trained at Nationale Balletacademie de Theaterschool. She is a freelance choreographer working in Utrecht, The Netherlands.

Becky Forknall is a costumier for the Royal Opera House. She doesn’t want to write anything ‘wacky’ in her biography.

Huge thanks to Arts Council England and The Young Vic for their undying support and generosity.