An opera about powerful passions and broken dreams, The Cry of the Double Bass charts a young man’s struggle against outer obstacles and inner demons to answer the call of his soul and realise his lifelong ambition in music. A deep and affecting work that will resonate with people of all ages.

The Cry of the Double Bass is the creative result of Sebastiano Dessanay’s experience over many years as a double bassist and a composer. It was composed during his PhD at Birmingham Conservatoire between 2010 and 2014.

This contemporary music work explores a subject rarely seen in an operatic context: the growth and progression of a musician. It tells the story of an unnamed artist, charting his journey from childhood to being an accomplished musician. The performer and his instrument, the double bass, are the protagonists around whom the plot evolves; creativity; the artist’s inner and spiritual search; the way society perceives musicians; overcoming various obstacles – the main themes. Richly symbolic and told as a mythic ‘folk tale’, it blends comedy and pathos, as it grapples with challenges many artists will know only too well.

The work holds a universal message, which is across-the board and goes beyond the world of artists, and particularly important for young audiences: take decisions following your own heart.

(The first act covers the protagonist’s childhood, focusing on the conflict between his musical dreams and the narrow expectations of his family and culture)

A Boy is inspired by a mystical tune to make music and he dreams about being a famous musician. But from this moment he is dogged by the fantastical Big C – a personification of inner resistance and negative forces that work against an artist. His Mother’s perception that he is somehow not ‘normal’ is confirmed by other authorities in town: they believe his artistic tendencies should not be encouraged. The Boy has an ally in his Grandpa, who encourages his musical ambitions. When Grandpa dies, the Boy accuses Big C of murder and swears revenge. Grandpa bequeaths the Boy his double bass, but he is too small to play it and the instrument is locked in the family garage. His parents want him to give up studying music, but the Boy tries to change their minds by giving a house concert, to no avail. Finally, Big C persuades him to give up the struggle his dreams entail.

(This central act covers the protagonist’s years as an undergraduate, focusing on the ‘seismic shift’ from the absence of music in his life to his decision to study music at university)

Years have passed and at a family party the Young Man announces he’s going to study geology. However, as the Young Man tries to focus on his degree and be content with his Girlfriend, the call of the double bass is too strong and he visits the garage to form a ‘sensual’ relationship with the instrument. When his Girlfriend discovers this and she threatens to leave him, he proposes to her and he ‘breaks off’ his relationship with the double bass. The couple celebrate their engagement with the Young Man’s parents but the Young Man cannot suppress his musical desires and he suffers a breakdown. In a vision, his grandfather sings about the consequences of not following your soul’s desire. The Young Man awakes and announces his resolve to study music, but his parents have sold his instrument, with the knowledge of his fiancée, to pay for the wedding. Furious, the Young Man breaks off the engagement and his parents practically disown him.

(The final act presents the Young Man’s struggles as a music student, from his first lesson to recognition as a musician)

Supporting himself in his studies and trying to make up ‘lost ground’, he juggles various personal and musical challenges. Big C returns to undermine him and, when he is diagnosed with tendonitis, his life spirals out of control. But his Professor offers him a way out: a cottage in the mountains where he can stay undisturbed. Alone in this peaceful place, the Young Man is forced to confront himself and Big C. In a dream sequence, the Young Man and the Boy seek out Big C’s cave. There they discover the truth of the foe they have been battling for years. The Young Man finds a new resolve and spiritual calm, and his tendonitis heals. He composes and plays with increasing fluency and sophistication. When he returns to town the Professor gives him a double bass: he’d bought it at an auction some years ago and it is the very same instrument left to the boy by his Grandpa. Reinforced by this, the Young Man gives a concert and his parents witness his success. Proudly, they see their son off as he embarks on the next phase of his musical life. The Young Man is once again hounded by Big C but, as a result of his experiences, he is able to subdue him.

The Cry of the Double Bass from Tête à Tête on Vimeo. 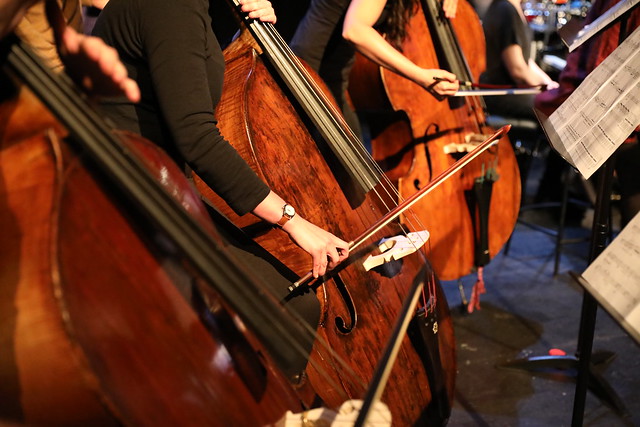 The Cry of The Double Bass: Act 3

The Cry of The Double Bass: Act 3

Sebastiano Dessanay is an Italian double bassist and composer based in Birmingham. His music is highly informed by a strong sense of melody and attention to textural details. The double bass has often a prominent role in his research and elements of improvisation permeate his compositions. For more info visit www.sebastianodessanay.com

Mike Carter Mike’s most recent writing for theatre includes A Peaceful Resolution (REDfest at the Old Red Lion) and Sandman, a collaboration with performer Adie Mueller, which has been touring since a run at the London Horror Festival in 2015 and can be seen (at ZOO 140 Pleasance) at this year’s Edinburgh Fringe.

Riccardo Buscarini is an award-winning choreographer, Riccardo Buscarini is an artist focused on constantly changing his creative approach to choreography and exploring its possible interactions with other art forms. His works to date are all quite different and include pieces for the stage, urban spaces and art galleries. For more info visit www.riccardobuscarini.com

Daniele Rosina is a conductor working with orchestras, ballet and opera companies in repertoire from the baroque through to the present day. He is Director of Orchestral Studies at University of Birmingham. As an educator he teaches conducting at this University and Birmingham Conservatoire.

Themba Mvula was born in Zambia and studied music at Birmingham Conservatoire where in 2006 he won the Gordon Clinton English Song Prize. Recently performed operatic roles include The Gentleman in The Waiter’s Revenge with Birmingham Opera Company, Papageno (The Magic Flute) with Midland Opera and Publio in La Clemenza di Tito with Kent Opera.

Natalie Raybould is a British soprano. She studied at St. Edmund Hall, Oxford University, and the Royal Academy of Music, London, and was awarded an Associateship of the RAM in 2011 for her contribution to contemporary music. Natalie has worked with every major company in the UK developing new works of every possible description, and continues to do so with great gusto.

Peter Brooks is an aspiring bass-baritone singer from London and a recent graduate of the University of Birmingham. Peter has performed in many operas including The Marriage of Figaro (Bartolo), The Cunning Little Vixen (Gamekeeper) and Albert Herring (Superintendent). Peter has also performed as a soloist in many choral works including Britten’s Rejoice in the Lamb and Bach’s Wachet Auf cantata.

Louisa Petais began her musical career as a pianist before focusing on singing. An alumnus of Trinity College of Music she also attended the L.T.L (Laboratorio Toscano per la Lirica) Opera Studio in Italy and has performed at various theatres in Tuscany and Belgium. In the UK she has sung and covered various roles, including Carmen (Carmen), and Amelia (Un Ballo in Maschera)

Peter M Smith is a versatile actor based in Birmingham. He predominantly works in theatre and film, and has a particular interest in performing Shakespeare.

Sandro Fontoni Since 1999, Italian Sandro Fontoni has been principal double bassist in the Teatro Lirico di Cagliari Orchestra. He has played under conductors such as Carlo Maria Giulini, Lorin Maazel, Georges Pretre, Msitislav Rostropovich, and Sir Jeffrey Tate. He has also studied electroacoustic composition and arrangement.

With thanks to: University of Birmingham, Warwick School and Bromsgrove School for their in-kind support. And all the artists and collaborators who believed in this work and gave their time and talents to it.

One Day This Will Be Long Ago