The poet Sergei Esenin was born in 1895 into a peasant family, and much of his work is born of a passionate love for his homeland and its people. He would live through and comment on revolution and world war, but it was in the mud and hardship of peasant life that he saw real beauty. Esenin was lionized by the artists and aristocrats of Petrograd and Moscow, being treated as something of an amusing – and brilliant – wild-man.

He was increasingly plagued by the bouts of alcoholism and depression which would lead to the fragmenting of his personality and, ultimately, his death. In December 1925 he wrote his last poem in his own blood, cutting his wrists in a failed attempt at suicide. The following day he succeeded.

The poems written towards the end of Esenin’s short and turbulent life are almost entirely autobiographical and yet they speak simply, with tenderness and brutality of the universal: of the transience of life and of our keen sense of this.

“REMEMBERING…     …FORGETTING” is not a biographical work, rather a tribute to the poet’s potent, perceptive and seductive voice.

In this, our second development of the project, we are moving the work away from the poignancy of its own history – Nigel’s original “Remembering Esenin” (1974); my original choreographic response to this (1984); our personal histories behind the creation of these – and more into the present. Many more of the fragments of the original score will now be played live so that the work can take on a fresh urgency, and one that is shared by all three performers. Perhaps our new version of the piece may be tougher, rougher than its predecessor…perhaps it will also be “readier”: more prepared to look ahead, as well back, in time. 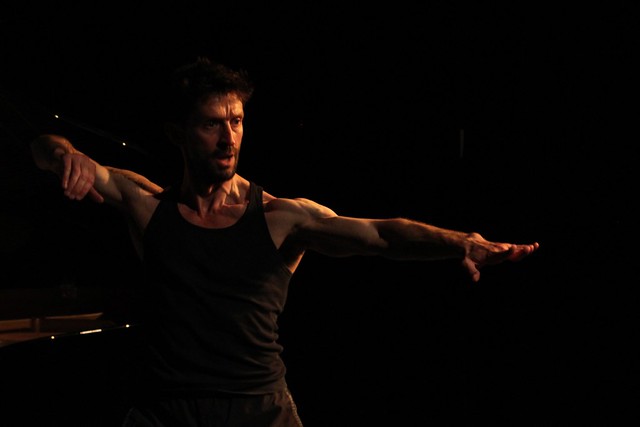 A composer with an international reputation, Osborne studied with Wellesz, Leighton and Rudzinski. He created the first opera of the war in Sarajevo, Evropa, with Dino Mustafic and Goran Simic, and later produced Differences in Demolitions with Simic for Opera Circus. Osborne has also pioneered programmes of creative arts therapy for children who are the victims of conflict.

Popper has a multi-faceted career creating and performing work in the fields of music, dance and theatre. His choreographic and directorial developments bear witness to an interest in the breaking-down of barriers between the arts. They have earned the endorsement of a wide range of fellow artists and thinkers, and the occasional attention of the Arts world’s oligarchy.

Friend studied at Edinburgh University and at Eastman School of Music in America. She sees her role as a musician not just as performing cellist but as a community musician and educator – facilitating all kinds of people to use music as an expressive and communicative tool. She plays frequently with the Scottish Chamber Orchestra.