This is a rough and ready experimental music-­‐theatre production that came to be from a desire to create more collaborative and experimental forms of music-­‐theatre and opera. Using sparse text, projections and musical improvisation, it was developed with the intention of loosening up the predictive nature of the score and libretto

– looking to separate the dramatic communicative means. Developed in rehearsal around a pre-­‐written script using improvised music, it is a contemplative and unexpected production celebrating life and the inevitability of death.

Inspired by a Charles Bukowski poem, the poet himself and a little known play – The Theatre of The Soul – by Nikolai Evreinov, I SING THE BODY ELECTRIC follows our protagonist from birth until death, exploring what it means to live life to the fullest. From gambling, to drinking and struggling to understand love, we watch as the main character figures out what life will mean to him. 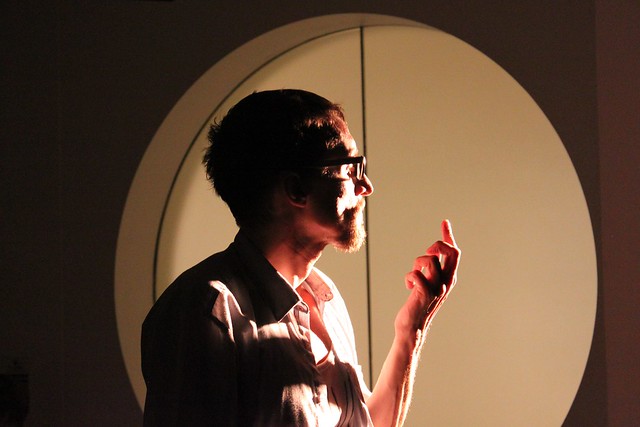 Claire Blake is a costume designer, music-­‐theatre director and advocate of experimental approaches to opera. UK-­‐based for seven years, she now lives in Vienna. Blake works mainly in opera and theatre. She has worked for Scottish Opera, Edinburgh Fringe, Die Taschenoper and Dschungel Wien and participated in Prague Quadrennial and Hack the Barbican, amongst others. giantclaire.blogspot.com

Hannes Dufek studied composition under Chaya Czernowin and Michael Obst in Vienna. He is a freelance composer, engaging in various fields, from contemporary musical theatre to free improvisation. He is founder and chairman of Platypus Ensemble – a specialist ensemble for contemporary music. His work is available from Verlag Neue Musik Berlin. soundcloud.com/hannesdufek

A diverse artist, Werner Kitzmüller is a self-­‐trained pianist, musician and composer. He released his first solo album in 2007, founded the ensemble Werner Kitzmüller Trio in 2008 and has since performed with loca and international musicians. His latest solo album, Evasion is available on Valeot Records.

Christina Scherrer is an actress and singer for theatre, film and television. She writes her own satirical one-­‐ woman music-­‐shows, founded a comedy duo in 2012 and debuted as an opera singer for the Wiener Festwochen in 2013. She received the Youngstar Award for Best Upcoming Artist in 2013. She studied in Graz. christinascherrer.at

Jonas Bente is a writer and very active amateur actor. Originally from Germany, he studies philosophy and sociology in Vienna. He is a member of Stuthe – a not-­‐for-­‐profit theatre production company. Having completed one book already, Bente writes surrealist short stories and poems. He is currently working on his first novel.

Gloria Damijan studied piano and pedagogy at Music University, Vienna, where she was first exposed to contemporary music and free improvisation. Organiser of the concert series, Grenzwerte and Donau-­‐Tejo in Vienna, she is a member of SNIM and free improvisation ensembles: ctrl, lsd and ÖNskekvist. She has performed internationally.

A pedagogue and performer, Gabriele Drab is co-­‐founder of SNIM – Spontaneous Network for Improvised Music. Her repertoire spans from free improvisation to contemporary and early music. She studiedunder Ulrike Groier and Hans Maria Kneihs in Vienna, Lene Langballe in Copenhagen and AntonioPolitano in Lausanne. gobidrab.at

Bernhard Schöberl studied in Vienna and Oslo. Co-­‐founder and chairman of SNIM, Schöberl is an active performer and organizer of events, concerts, festivals and projects. He is a member of ctrl and lsd, RSO and SWR Orchestra, as part of Wien Modern, and Donaueschinger Musiktage. He improvises using string instruments and electronics. bsch.klingt.org

An active member of the Viennese improvised music scene, Réka Kutas has worked in theatre and dance productions. She is a member of SNIM, participant of ÖNCZkekvist exchange and organizer of contemporary music and improvised music events. She studied at University of Vienna.soundcloud.com/rosirehformen

Michael Zacherl is an Austrian musician, sound artist, composer and engineer focused on live performance. He has been interested in electronic sound devices and prepared traditional instruments since his early youth. He studied computer music and electronic media, traditional and new percussion. He creates and performs multi-­‐ channel fixed media pieces and plays compositions and improvisations on DIY instruments.