The Secretary Turned CEO is a radical refurbishment of La serva padrona, Pergolesi’s seminal comic intermezzo of 1733. With a contemporary, guitar-based soundscape built on his bassi continui, and a farcical power struggle transposed to a contemporary business workplace, it is a sardonic satire on the meritocratic society and the value of hard work.

Becca and I had previously worked on our own modernised productions of Pergolesi’sLa Serva Padrona when we met. With an Uberto (Henry) in common, we joined forces. Here was a vibrant, punchy comedy with a rich vein of satire. A modern audience deserves it served up the same way as the original: sharp colloquial language, musically accessible, highlighting relevant social concerns, spiked with a touch of scandal. (Danyal Dhondy)

Henry, the CEO, is a busy and important man. He needs a frothy cappuccino in the morning, andhe needs it brought promptly by his secretary. What else does he pay her for, after all?

Serena is Henry’s long-­‐suffering secretary and PA. Actually, she does most of the work in the office, but no-­‐one seems to realise. Henry is lucky that jobs are so scarce these days; otherwise, she’d be long gone.

There’s also an intern in the Soft Sheets offices, here on an EU work-­‐placement scheme. Serena can’t see what he adds to the company, but Henry sees something he likes in the kid. 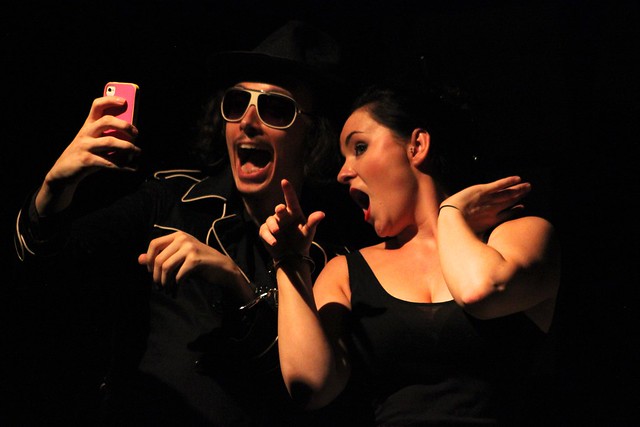 Dionysios Kyropoulos read music at City University London and studied singing at GSMD, with Robert Dean. He has performed numerous roles with several opera companies and, in the next academic year, will be studying for an MPhil in Music Studies at the University of Cambridge – further developing his research on historical stagecraft.

Since graduating from King’s College London with an honours degree in English Literature, Charlie Drummond has been studying in London with Laureen Livingstone at Trinity Laban Conservatoire of Music and Dance. Recent engagements include: Haydn’s Creation (St John’s Smith Square), and Tchaikovsky’s Eugene Onegin (Bury Court Opera). In September, she will be moving to the Royal Conservatoire of Scotland to study for a Masters.

Alberto Prandini trained at Arts Ed and Ecole Lecoq. He is a physical theatre actor who has performed all over Europe in a wide variety of theatre and dance shows. He is currently producing a French play called La Mastication des Morts, which will open at the White Bear in October 2013.

Danyal Dhondy is a composer from South London. His opera Just So was performed at last year’s Tête à Tête: The Opera Festival. He has made orchestral reductions for companies including OperaUpClose andMalmö Opera. His next project, Quys and Laila, will be performed at the Grimeborn Opera Festival on August 30th and 31st.

Anna Gregory is an opera singer and director, best known for the smash hit Pagliacci (OperaUpClose). Anna trained in stage craft at ENO. She will be singing Seiglinde Die Walkure at St John’s Smith Square in October, and will return to Trinity Laban to direct postgraduate opera scenes this winter.

Buffy Sharpe has worked as a business advisor and project manager for the Prince’s Trust and a fundraiser for Crisis. She has produced 12 performance arts events through her company Eclectic Opera, and as a freelancer. She also makes costumes and librettos. She believes in creating beautiful, innovative and non-­‐elitist productions.