Bastard Assignments are a composers’ collective based in south London. Last year, they started producing dramatic works, developing an on-­‐going relationship with Second Movement and Téte â Téte: The Opera Festival with Manspangled, That Woman and Because That Is Perceived To Be The Hardest Part.

HUM is a fragmentary portrayal of a woman’s advancing hearing loss. It details her changing relationship to the outside world, including her family.

HE/HIMSELFIE attempts to raise the underrepresented issues surrounding male bodyimage whilst referencing the modern day phenomenon that is ‘Selfie’ culture and works by key figures including Foucault and Freud. The performers create different worlds on stage, as they inhabit different characters and concepts, delineated clearly, and sometimes unclearly, using audio, movement and video.

THE IMAGE IS A WOMAN IN A FOREST, LISTENING is an attempted poetic unveiling of an image interrupted by a statement from an unnamed insurgent group. 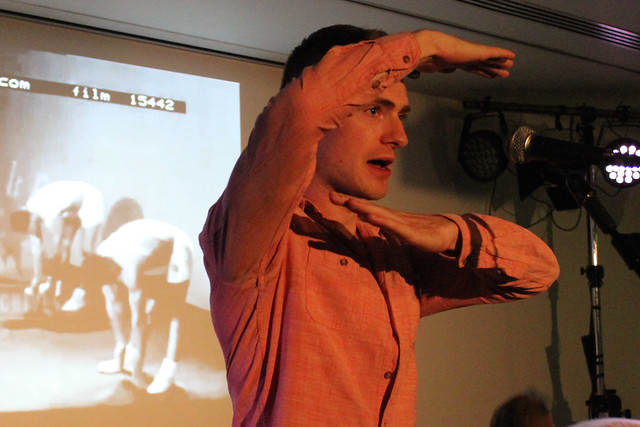 Words: Josh Spear, with an additional text by Richard Dodwell

The image is a woman in a forest, listening

Words: Josh Spear, with an additional text by Richard Dodwell

The image is a woman in a forest, listening

Edward Henderson is a composer who makes work with instructional scores, found objects, repetition and duration. He studied Music at the University of Cambridge and Composition at Trinity Laban where he won the Directors’ Prize for Composition. He is a Director of the composers’ collective Bastard Assignments.

Josh Spear is particularly interested in the middle ground between disciplines like opera, film, music, theatre and movement and strives to create highly dramatic and meaningful work. He is a grateful Trinity College London Scholar and glad to return to the festival after last year’s run ofThat Woman.

Timothy Cape is a composer interested in the theatrical possibilities of musical performance. His pieces often look at the experience, culture and ceremony of performance, through the medium of sound, text and gesture.

Lavinia Murray is an award-­‐winning writer, animator/cartoonist and performer. She trained as a clown at Blackpool Circus and as a robotic dancer/mime with Annie Stainer and New York artiste Topo. She also trained as a storyteller with Ben Haggarty. Her latest play for BBC Radio 4 has just been nominated for the Peter Tinniswood Prize. She has also written for opera.

Richard Dodwell is a performer of theatre, live art and film. In 2015, he became a founding member of Chris Goode’s experimental performance ensemble Ponyboy Curtis, as well as a recipient of Duckie’s training lab bursary. He is currently an on-­‐going collaborator of performance artist David Hoyle and director Nick Blackburn.

Louis D’Heudieres has written works for a wide range of human and electronic media, from solo performer to large ensemble, from semi-­‐improvised music theatre to live electronics, from concert hall to online video installation. His music has been performed internationally in Europe and at many of London’s alternative music events. He is currently studying for a PhD in composition at BathSpa University with James Saunders. www.louisdheudieres.com

Caitlin Rowley is a Kent-­‐based Australian composer whose music often draws on the visual arts as a path to exploring sonic ideas. Her teachers have included Peter Sculthorpe, Errollyn Wallen and PaulNewland. Recent works include Crossing Dartmoor, also at Tête à Tête: The Opera Festival this year. http://caitlinrowley.com

Lewis Bretherton is a graduate of Trinity Laban where he studied with Mary Wiegold and Robert Aldwinkle, and was the recipient of the Contemporary Music Prize. Notably, he has performed music by Philip Venables, Jonathan Dove and Handel and premiered Janice Kerbel’s Turner Prize nominated work DOUG in Glasgow.