Genesis: Size Zero Opera specialise in the commissioning and production of chamber opera written by emerging composers, with emerging opera creatives, and have grown to be recognised as “holding the torch for the future of new opera” (Classical Music Magazine). They have premiered over ten chamber operas and have four projects planned for 2014, including commissions from Chris Gendall, Laura J Bowler, Lorenzo Troiani, and Sam Bordoli.

About: VIAGRON, based on Petronius’s Satyricon, tells the story of the impotent Old Encolpius who looks back on the sexual failures of his youth in an attempt to rid himself of a curse and ultimately find forgiveness. As he relives his youth, he encounters a varied assortment of characters including: the boy-­‐soldier (a hermaphrodite) Chryton, a priestess of Priapus named Oenothea, a horny witch named Circe, and a giant goose. The result is a comic and touching meditation on male impotence and vulnerability. The set comprises decaying elements that emphasise man’s transience in the face of ruin. This production challenges the audience to encounter reasons for stagnation and emotional sterility, against the backdrop of the ruins of civilisation. VIAGRON – like Kettlehead (the other production Size Zero Opera will be premiering at Tête à Tête: The Opera Festival this weekend) – provides a profound meditation on what it means to desire intimacy, and what it means when that intimacy is unachievable. Together, these operas makea visceral, profound and intense pairing. 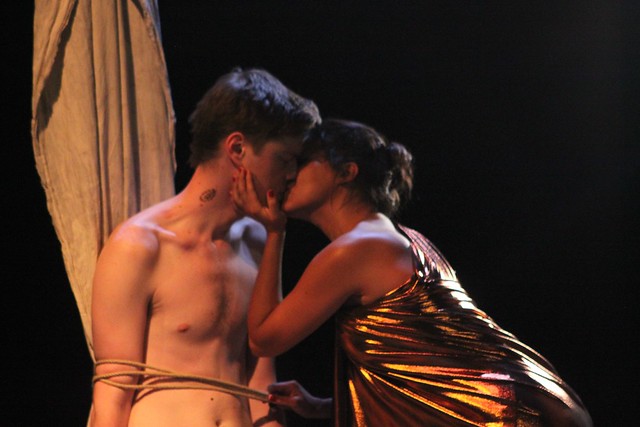 Arne Gieshoff is an RCM scholar supported by an ABRSM Scholarship and RWV Postgraduate Award. Previous teachers include Kenneth Hesketh and Cord Meijering. He received the RPS Composition Prize in 2012, and his works have been performed by the BBC SSO, Philharmonia Orchestra, and RSNO. www.arnegieshoff.com

Frank Allison is a budding writer and opera director, currently completing a postgraduate course, based in London. Highlights for 2013 include The Medium with Opera Alegria and the premiere of Arne Gieshoff’s opera, Viagron with Size Zero Opera at Tête à Tête: The Opera Festival.

Laura Bowler is a composer, mezzo-­‐soprano and opera director. She is Artistic Director of Size Zero Opera and Lands End Ensemble, has worked within the operatic field in many guises for The Opera Group, Music Theatre Wales, ROH, Den Jyske Opera and Glyndebourne, and is Manchester Camerata Composer-­‐in-­‐Residence 2013-­‐14.

Fly Davis trained at RADA and Motley and is SZO’s resident designer. Most recently she has been Associate Designer at the Royal Court. Fly has designed for the Bush, Arcola and Finborough theatres the Riverside Studios, Old Vic Tunnels, Hull Truck, Northern Stage and York Theatre Royal.

Gwen Taylor has a first-­‐class Music degree from the University of Birmingham, and studied Stage Management at RWCMD. She has worked as DSM for Clod Ensemble, as ASM for Music Theatre Wales, OperaUpClose and Grange Park Opera, and has interned with the Royal Opera House, Glyndebourne and Barber Opera.

Jonathan Mann is Music Director of the Cardiff Sinfonietta, Principal Conductor of the Hertford Symphony Orchestra and has a close relationship with the BBC National Orchestra of Wales, with whom he has recorded for BBC Radio 3. Jonathan has worked regularly with Size Zero Opera since 2011.

Robert Guy is Artistic Director of NEW Sinfonia and Principal Conductor to the Orchestra of Square Chapel. He will participate in this year’s ‘International Masterclasses Berlin’, alongside Michail Jurowski and the Berlin Sin-­‐ fonietta. Past highlights include working with Kirill Karabits and winning the Orion Young Conductor’s Award.

Richard Latham studied at Cambridge, RAM and RSAMD. Recent operatic roles include Papageno for Garsington Opera at West Green House and Mercurio in Atalanta for Cambridge Handel Opera. This summer he worked with Frederic Wake-­‐Walker on Britten’s Church Parables and covered the role of the Traveller in Curlew River.

Max Welford graduated from the Royal Academy of Music in 2012. He is a Park Lane Group Young Artist, and has performed widely as a concerto soloist, recitalist, chamber musician and orchestral player, most recently in New York, Berlin, Singapore and at the BBC Proms.