The songs are a development from part of a longer promenade performance piece entitled Beyond the Language of Zaum. Including sound poetry from other zaum authors, such as Velimir Khlebnikov, this is designed for a moving performer and audience within the multiple floor levels offered by large performancespaces, such as Bristol Arnolfini, where it was premiered last year. A subsequent tour to Cornwall also incorporated the use of an outdoor stairway entrance, thus drawing the public from outside into the arts venue. As such, I envisage an elaboration of the piece that will suit any possibilities offered by a large building. It will involve the use of pre-­‐ recorded sound, as well as amplified voice, and metres of suspended paper covered in zaum language that surround both performer and audience.

A playful promenade performance by soloist Caroline Wilkins complete with gramophone horn, which comes into its own not only as an amplifier but also as an extension of the body-­‐machine. We witness a rapid shift from one character to the next — The Bully, The Frightened One, The Aviator — as they make their brief appearances in excerpts from this crazy Cubo-­‐Futurist Opera of the same title, dating from 1913. The songs stem from Russian Folk and Cabaret traditions of the time and are written in a nonsensical, onomatopoeic language called zaum – a Russian word meaning “beyonsense”, in a deliberate misspelling of the term (hence the name of the production). The English translation evokes Lewis Carroll and his word inventions in rhyme, such as The Jabberwocky 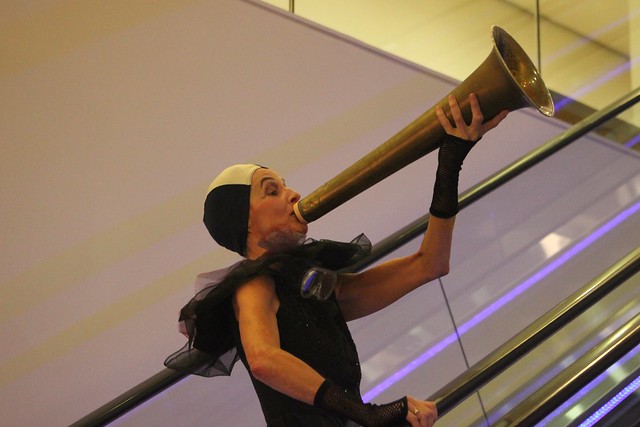 Caroline Wilkins comes from a background of new music performance, composition and theatre, and has worked extensively on solo and collaborative productions involving these. Her particular interest lies in creating new forms of presentation, whether in the fields of inter-­‐medial sound theatre, sound poetry or performance art. australianmusiccentre.com.au/artist/wilkins-­‐caroline