BabyO is a completed work with costumes. BabyO toured earlier in the year as a finished piece but the Research & Development phase of the project happened in November 2009. The audience are given a programme (containing a CD with 4 tracks from the show) after the show to play with at home.

Enter a secret garden where you and your baby will meet the ducks, the fish and the busy bees. Have fun while our singers create an enchanting musical experience for you to enjoy together.

Research has shown that babies respond to music from a very early age. Encourage your child’s sensory development with our 30-minute interactive show. The music in BabyO is entirely vocal and is sung using sounds and words that babies will recognise and reproduce. The vocals vary to musically mirror and enhance the scenery, props and the movements of the singers in the performance. 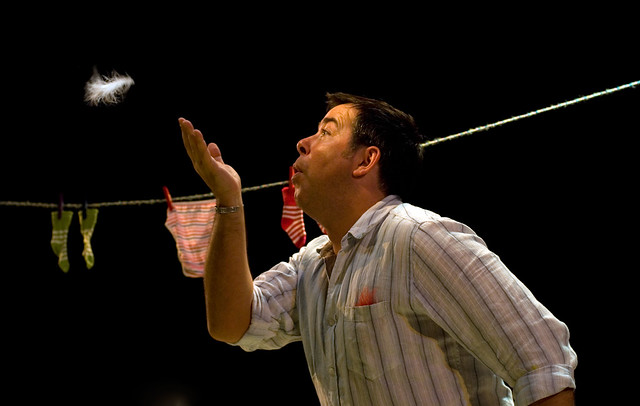 Rachel Drury is a freelance musician working predominantly in the field of music education. She has delivered education projects for various organisations including Scottish Opera, Children’s Classic Concerts and the RSAMD and is currently working towards a PhD researching music and language development in the early years. Rachel’s performance credits include BBC SSO, RSNO, Scottish Ballet, Scottish Concert Orchestra and RSNO Big Band.

Gloria Ellis was brought up on a farm in a small village in Mid Wales. She graduated from The Royal Northern College of Music where she was a finalist in the International Young Singer Competition. She was then awarded a scholarship for her Postgraduate studies at Trinity College of Music, London. She was a member of the chorus of Scottish Opera from 1997 – 2005.

Alison Maclaurin has been designing for over twenty years, particularly in physical theatre and young people’s work, with companies such as Hull Truck, Belgrade TiE, Theatre Peckham, the Shadow Syndicate, TAG and a variety of projects with Scottish Opera. Ali also teaches part-time at Adam Smith College, Kirkcaldy. This is the first show in which she has had to worry about the audience trying to eat the scenery!

Alan McKenzie           has worked extensively in both musical theatre and opera. Opera engagements for Scottish Opera include: Madama

Butterfly, Lucia di Lamermoor, Falstaff, I Puritani, The Two Widows and Manon. For the D’Oyly Carte Opera Company: The Mikado (cover Mikado), La vie Parisienne (Antoyne), The Count of Luxembourg (Pavlovich) and Iolanthe. Alan is married to Gillian and they have a six-year-old daughter Molly, so he knows a thing or two about babies!

Arlene Rolph studied at the Royal Scottish Academy of Music and Drama and attended the National Opera Studio. She has received the Richard Lewis/Jean Shanks Award at Glyndebourne and was a prize-winner in the 1999/2000 Kathleen Ferrier Awards. From 2003 to 2005 she was Associate Artist at Welsh National Opera. Scottish Opera appearances include: Monster, Cosi fan tutte, Hansel and Gretel, Tamerlano, Five:15 2009 and Five:15 2010.

Calum Wyllie is a freelance stage manager based in Edinburgh. Previous work with Scottish Opera includes: Millport Song Cycle, and BabyO (Scottish tour). Other recent work includes: As You Like It (Sprite Productions), Beauty & The Beast (UK Productions), and Autobahn (Theatre Jezebel). In his spare time Calum works part-time as an ecclesiastical vestment-maker.